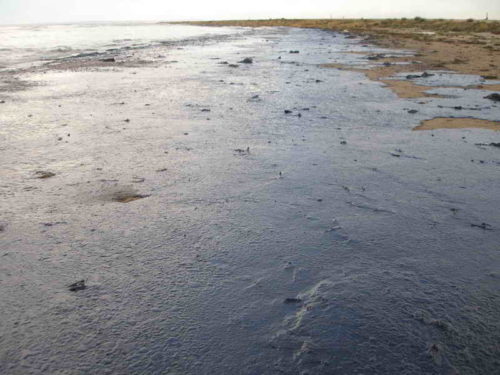 The Trudeau government is buying “the biggest lemon in Canadian history” with its C$4.5-billion pipeline buyout, MP Nathan Cullen (NDP, Skeena-Bulkley Valley) charged this week, following Kinder Morgan’s revelation that a recent spill at a pipeline pump station north of Kamloops was actually 48 times as bad as it originally admitted.

The Houston-based pipeliner reported the spill at 100 litres on May 27. Finance Minister Bill Morneau announced the government’s extraordinary decision to buy Canadian taxpayers a distressed pipeline on May 29. Two weeks later, the company disclosed that the line had actually spilled 4,800 litres.

“Two days before the Liberal government bought a 65-year old pipeline for $4.5 billion, that pipeline sprang a leak,” Cullen said in the House of Commons Monday. “‘But don’t worry,’ said Kinder Morgan, ‘it’s just a 100 litres.’ But it turns out that oil spill was 48 times larger than that. Thank God it didn’t happen over water, because these guys (in government) still don’t know how to clean it up.”

Cullen added: “Hey, you ever buy a used car, [and] when you turn it on it sounds really strange? But the seller cranks up the radio real quick and says, ‘don’t worry about it.’ But that’s what the Liberals just did, maybe buying the biggest lemon in Canadian history. So what kind of climate leader goes out and buys a 65-year-old, leaky pipeline, anyway?”

While attention focused on the latest spill along the existing Trans Mountain line, a couple on the Coldwater Reserve near Merritt, B.C. is still dealing with a very old one. “It’s been four years since Janice Antoine and Percy Joe first learned about an oil spill on their land, after a so-called anomaly was discovered in the Trans Mountain pipeline that runs beneath the couple’s property,” CBC reports. What Kinder Morgan called a “small, contained historic contamination” was uncovered during routine maintenance work in 2014, and appears related to an underground spill that occurred when the pipeline was rerouted—in 1968.

Antoine and Joe are still waiting for the spill to be cleaned up. With Canada buying the pipeline, there’s an added twist.

“I don’t know what the way forward is and how we can get this cleaned up and sorted out,” said Antoine. “And I don’t even know who we talk to now.”

She and Joe are wondering whether they’re “being sidelined due to political and legal disputes over the expansion project, which is strongly opposed by the Coldwater Band,” CBC notes. And they’re worried about the long-term exposure they may have experienced.

“If it’s been there since 1968…then how bad of a contamination was there at that time?” Joe asked. “How is it impacting our health? We don’t know.” He also pointed to a consulting report commissioned by the community, which concluded that “all of the contamination may not have been identified.”

Echoing the concerns in Coldwater and in the House of Commons, a May 2017 disaster preparedness exercise has the state of Washington casting doubt on Canada’s ability to clean up after a pipeline spill.

The “worst case scenario” exercise in Whatcom County “simulated an early-morning spill of 3,024 barrels of heavy synthetic crude oil in the Sumas River, which crosses the border at Abbotsford in British Columbia’s Fraser Valley. That drill left Washington State officials concerned that Canada is not prepared for heavy oil to sink in a marine environment,” the Globe and Mail reports.

“Kinder Morgan brought together highly skilled staff to form a cooperative spill management team” that focused on oil sinking in the river, according to a state official’s after-action report. “It is unclear why the non-floating oil detection tactics developed for the U.S. side of the spill scenario were not also planned for the Canadian side,” the report stated.

“One explanation may be that Canada has a more optimistic outlook of what an oil spill would look like,” the Globe writes, after Environment Minister Catherine McKenna told the B.C. government that oil—including diluted bitumen— “will float initially for several days depending on the environmental conditions.”

But “Washington State officials say their read of the science is different,” the Globe adds. The state was also concerned that “British Columbia and Canada were unable to explain what resources they would offer up in the event of a major spill in a shared waterway.”

Investment Fund Demands Board Chairs’ Resignations for Lagging on Climate