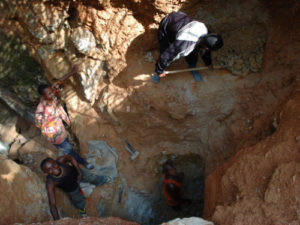 Although rapid growth in Europe’s lithium-ion battery industry is coinciding with the emergence of domestic sources of cobalt, the Democratic Republic of Congo (DRC) will still continue to supply the motherlode of the critical mineral.

That sourcing matters, given concerns that cobalt could become the new conflict mineral coming from a country that is severely compromised on human rights and workplace safety.

“Europe is expected to become the second-largest region for battery production in the world, after China,” Benchmark Mineral Intelligence analyst Caspar Rawles told Greentech Media, “with capacity rising from around seven gigawatt-hours last year to 80 gigawatt-hours by 2023.” And those two new centres of supply aren’t alone. Companies like Lithium Australia, which last month reported a new cobalt discovery in Germany’s state of Saxony, are hoping to meet the demand “as a number of manufacturers gear up to build lithium-ion gigafactories,” GTM notes.

Other interested parties include another Australian firm, Berkut Minerals, which has purchased licences to mine cobalt in Norway and Sweden, and Canada’s Boreal Metals, which is also “eyeing cobalt extraction in Scandinavia.”

However, “with many projects still at an early stage, it is unclear how much cobalt these and other European reserves will be able to deliver,” Greentech states. “What does seem likely, though, is that any output from Europe will be dwarfed by that from new extraction projects starting up in the DRC.”

Among the biggest players is minerals giant Glencore, which last December reopened the DRC’s Katanga mine. Sitting on one of the world’s largest cobalt reserves, the mine is projected to produce 34,000 tones of the mineral per year by 2019.

While “that’s a big increase,” he added, “it could easily be handled by just a couple of the projects coming online in the DRC.”

As a result, “while discoveries such as the Lithium Australia one are important, we see the DRC becoming more dominant in the cobalt supply chain,” he said. “Ultimately, there will be no lithium-ion battery industry without DRC cobalt.”