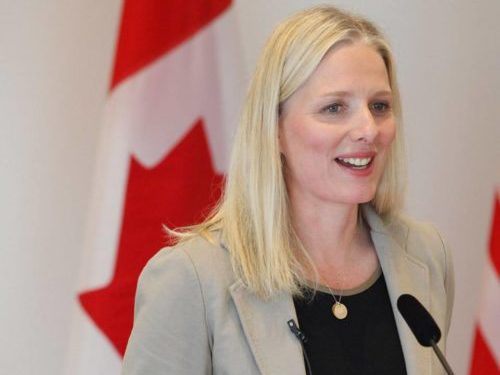 The Canadian government says it has no intention of relenting on its national floor price on carbon, following the election of a new Ontario premier who has promised to end his province’s successful carbon cap-and-trade program.

“No,” said Environment and Climate Minister Catherine McKenna, when asked whether she agreed with federal Conservatives’ claim that Doug Ford’s election in Ontario [driven by a roughly 5% change in his party’s popular vote in Canada’s first-past-the-post electoral system] represents a “rebuke” to federal climate policies.

“We’ve been clear to Canadians, and the world has been clear, that we need to take serious action to tackle climate change,” McKenna told reporters in Quebec City Friday. “At the same time, we need to grow our economy and create good jobs, and that is exactly what we’ve been doing.”

Federal Conservative finance critic Pierre Poilievre claimed the Ontario vote meant that “the people have voted against the prime minister’s carbon tax” and asked whether Trudeau would “accept the verdict of the people and cancel his carbon tax plan to raise the price of everything.” CPC public services critic Tony Clement added that Ford’s election win left federal carbon pricing “dead on arrival.” McKenna pointed out that 80% of Canadians already lived in jurisdictions with some form of carbon pricing in place when the federal floor price was introduced.

Outside the House of Commons, McKenna’s Parliamentary secretary, Jonathan Wilkinson (L, North Vancouver), “accused Conservatives of neglecting established science and failing to have a plan to combat climate change,” the Toronto Star reports. While Ottawa wants to work with the new Ford government on carbon pricing, he said, Canada will impose the floor price if it has to.

“The details of ‘coming down heavy’ on polluters remain vague,” CCP noted. “If he repeals the Liberals’ cap-and-trade market as he has promised, he would be faced with the federal government’s backstop legislation which would impose a carbon price. Ford has pledged to join Saskatchewan’s Scott Moe to fight the federal carbon pricing legislation, but most legal experts believe that this will be a losing battle due to clear federal jurisdiction over taxation and pollution regulation.”

“Pallister says Manitoba’s plan will help the environment without hurting the economy,” The Canadian Press reports. “He also says Ontario may find it difficult to dismantle its climate change program, which includes a cap-and-trade component” that the province might have to pay billions of dollars to unwind.