Pipeline Roundup: Trade with China May Have Driven Trudeau Push for Kinder Buyout 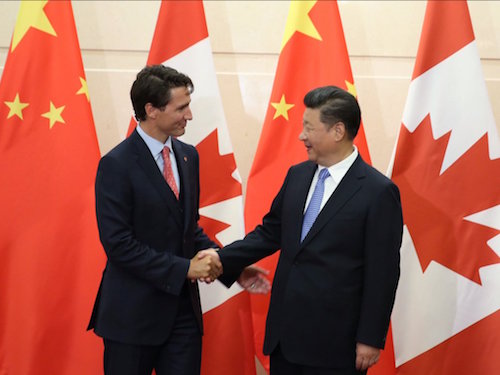 A Canadian trade deal with China in 2014, and the Trudeau government’s continuing interest in keeping its trading partner happy, may be at the heart of the federal decision last week to buy out the Kinder Morgan pipeline, Canadian journalist Bruce Livesey suggests in a post for The Guardian.

“Trudeau’s ferocious desire to build the pipeline at any cost seems bizarre on the face of it,” Livesey writes. “Ostensibly, his government claims the pipeline is good for the Canadian economy. But the pipeline will be shipping unrefined oil—known as bitumen—to be refined in the U.S. and Asia. This will cost oil refinery jobs in Canada, which is where most employment in the oil industry exists. Canada has been closing refineries for years now. The pipeline will only accelerate this trend.”

The deal also means Canada “will never come close to meeting its commitments to the Paris climate accord,” he adds, federal assurances to the contrary. “Most of the oil in Alberta’s tar sands will have to stay in the ground to prevent a global warming catastrophe.”

But when it came down to a Cabinet decision, all of that may have been secondary to the government’s desire to keep working with—and avoid a messy trade dispute with—one of the world’s fastest-growing industrial economies.

By 2009, five years before the Harper government sealed the deal on the Canada-China Foreign Investment Promotion and Protection Agreement (FIPA), an arm of state-owned China National Petroleum Corporation (CNOOC), had bought into two Alberta tar sands/oil sands operations that hold an estimated five billion barrels of oil. Then in 2013, CNOOC purchased Nexen, the country’s third-largest fossil company. Notwithstanding its commitment to rapid decarbonization, “China needs the oil to help fuel its industrial growth,” Livesey notes.

The problem with FIPAs, he writes, is that they are “frequently used by corporations around the world to challenge public policies or community decisions that interfere with their ability to make money.” Canada has paid out $160 million to U.S. corporations under the FIPA chapter of the North American Free Trade Agreement, and Canadian mining companies are using similar provisions to claim damages for community opposition in developing countries.

The Canada-China deal “allows Chinese energy companies to challenge local, provincial, and federal policies or laws that interfere with their ‘right’ to make a profit from energy projects,” Livesey explains. “So any environmental regulations, or halted pipelines, or First Nations land claims, could be subject to lawsuits brought by Chinese corporate interests.” Canadian companies would have the same right in China.

“More troubling, there is no requirement in the treaty for the federal government to make public the fact of a Chinese investor’s lawsuit against Canada until an award has been issued by a tribunal,” Osgoode Hall international investment law professor Gus Van Harten has noted. “This means the federal government could settle the lawsuit by paying out public money before an award is issued, and we would never know.”

In 2016, the federal government began negotiating a free trade deal with China, and Livesey says Trudeau is “desperate” to keep those talks in play. At the time according to the Globe and Mail, “a senior Chinese official said this will require Canadian concessions on investment restrictions and a commitment to build an energy pipeline to the coast”.

The net result: “In what might be a strategy to avoid lawsuits from Chinese companies that may result in massive secret payouts, Trudeau’s government may find itself arresting Canadians,” Livesey writes.

In other pipeline news, while details of the Kinder Morgan bailout deal will be confidential until the fall, National Observer reports that it includes C$1.5-million retention bonuses for Kinder Morgan Canada executives Ian Anderson and David Safari. “The arrangements were reviewed and approved by the Kinder Morgan Canada board of directors and are consistent with industry practice for a project and transaction of this size,” wrote Trans Mountain spokesperson Ali Hounsell.

A filing with the U.S. Securities and Exchange Commission also shows that the deal “may have saved companies operating in the Canadian oilsands about $700 million in losses that they would have been forced to absorb if the pipeline operator had abandoned its project,” Observer notes. “This would be their share of expenses to cover the existing construction expenses by Kinder Morgan, based on the agreements they signed to be shippers on the Trans Mountain expansion pipeline.”

The federal Export Development Corporation, assigned to provide a loan guarantee for the $4.5-billion bailout, was still figuring out its role in the deal last week, two news reports focused on First Nations in British Columbia and Alberta that want to invest in the project, and renewed protests in B.C. rebranded the project the “Justin Trudeau Memorial Pipeline” while a judge placed strict new limits on protests at the pipeline construction site.

In The Guardian last week, 350.org co-founder Bill McKibben slammed Trudeau as “the world’s newest oil executive”, suggesting the PM had revealed his “true self” by deciding to nationalize a pipeline. “In case anyone wondered,” McKibben wrote, “this is how the world ends: with the cutest, progressivest, boybandiest leader in the world going fully in the tank for the oil industry.”

McKibben countered any sense that the purchase is a “clever financial decision” that will pay off for Canada in the long run. “This is simply a scared prime minister playing politics. He’s worried about the reaction in Alberta if the pipe is not built, and so he has mortgaged his credibility. His predecessor, Stephen Harper, probably would not have dared try—the outcry from environmentalists and First Nations would have been too overwhelming.” Trudeau may be counting on his “liberal charm” and his contrast with Donald Trump to “soothe things over”, McKibben adds, “but it seems like a bad bet to me”.