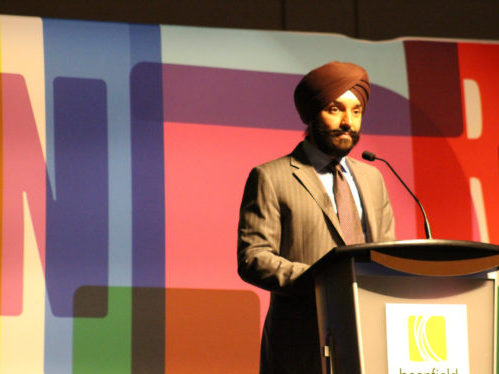 With controversy still swirling around the cabinet decision to risk C$4.5 billion in taxpayers’ dollars on the Kinder Morgan pipeline, Innovation Minister Navdeep Bains took the stage at the Third Annual Cleantech Leadership Summit in Ottawa a day later to announce $26.3 million in new funding to four Canadian cleantech companies.

“Clean technology employs over 170,000 Canadians. It sells about $26 billion annually in goods and services,” Bains said. “And of that $26 billion, about $8 billion is exported.”

In a follow-up email Wednesday, he added that “just like yesterday’s announcement on the Trans Mountain pipeline expansion project, today’s announcement on clean technology is yet another demonstration that the economy and the environment go hand in hand. That has always been our government’s vision, and it remains the case today.”

The cleantech funding, about 0.58% the value of the Kinder Morgan announcement, will be shared by four companies: D-Wave Systems Inc. of Burnaby, B.C., Ionomr Innovations Inc. of Vancouver, MineSense Technologies Ltd. of Vancouver, and MEG Energy Corporation of Calgary.

“I can’t wait to see the discoveries these companies advance and the work they do in the field of clean technology,” Bains said.

In recent years, Canadian analysts have warned that the global cleantech boom is leaving the country behind. In informal conversations, cleantech entrepreneurs have complained about slow approvals and unclear processes from Bains’ department, to the extent that one international investor who had sought out a promising project recently decided to abandon Canada.