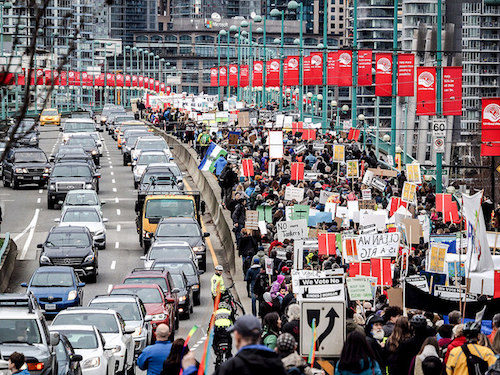 “In a single mandate, Justin Trudeau transformed from a climate champion into a Big Oil CEO. He had an opportunity to walk away from pipeline politics and get on with the real work of leading Canada, and the world, in a 100% renewable energy revolution, but instead he’s opted to ignore science, Indigenous rights and the voices of people across Canada and bailed out a dangerous, unwanted pipeline with public money. Today is not be the end of this story. Kinder Morgan abandoned this project because people organized all across the country to stop it, and we’ll do it again. This fight is far from over, and now that Justin Trudeau has turned the Canadian government into a fossil fuel company, it’s crystal clear who we’re up against.” —Aurore Fauret, 350.org

“This decision will haunt the Trudeau government. Those of us who knocked on doors for him will not forget that he took billions of dollars from Canadian families to buy out an oil pipeline that violates Indigenous rights and our commitments on climate change. Thousands of people have committed to stand with Indigenous leaders to stop this pipeline. All hell is about to break loose in British Columbia.”  —Tzeporah Berman, Stand.earth

“In a year when Canada, as host of the G7, takes to the international stage to champion action on climate change and oceans protection, we can and must do better. This amounts to billions of dollars of new subsidies to the fossil fuel sector, while G7 commitments bind Canada to eliminating those subsidies by 2025. National interest would be served by building clean drinking water infrastructure for all Indigenous communities, a robust east-west electricity grid that can move renewable power, and a national public transportation system that services urban and rural communities alike.” —Catherine Abreu, Climate Action Network-Canada

“Canada’s purchase of a tar sands pipeline and expansion project eviscerates any claim it has to climate leadership at a key moment—doubling down on the world’s dirtiest oil, rather than closing the gap on the country’s Paris climate commitments. The staunch opposition of British Columbia and Indigenous communities to this project is wholly appropriate, given the spill risks associated with the tar sands project. The Trudeau government is underwriting a risky and misguided project, one for which Canadians and the world will be stuck with the bill for generations to come.” —Anthony Swift, Natural Resources Defense Council

“It leaves Canadians on the hook for a risky pipeline that lacks a viable business case, flouts Canada’s commitment to Indigenous rights and reconciliation, and faces intractable legal, political, and regulatory obstacles. If an American company isn’t willing to put its shareholders’ money on the line to build this tar sands pipeline, then Prime Minister Trudeau shouldn’t put Canadians’ money at risk either.” —Patrick DeRochie, Environmental Defence

“Prime Minister Justin Trudeau is making a historic mistake in buying the doomed Kinder Morgan project. At a critical moment in history, the government is indeed doing ‘whatever it takes’ to undermine our transition to a safe, clean, renewable energy future. “Like other proposed export pipeline projects before it, Kinder Morgan will not be built. Public opposition, legal challenges, and failing economics have stopped all new tar sands exports to date. This government is using taxpayer money to buy a doomed asset with no value.” —Adam Scott, Oil Change International

“As the federal government contemplates propping up a Texas-based oil conglomerate with a taxpayer bailout, reasonable voices in the business community are calling for common sense to prevail…To help build a better future, we need reasonable members of the business community to speak up now. Indigenous communities are leading the charge and millions of people from across the country have taken action. Now it’s our turn.” —Steve Anderson, Let’s Move Forward, for more than 1,000 business signatories so far

“Kinder Morgan just won the lottery…What else could the Canadian public do with $4.5 billion?? We could fix the drinking water in every community across Canada. We could put 171,000 university students through school. We could kickstart a clean energy revolution.” —Sophie Harrison, Dogwood Initiative

“$4.5 billion of Canada’s money, to buy a bitumen pipeline? Some suggest that it could rise as high as $12 billion, including future construction and legal costs. So what if the money was invested in solutions to the climate crisis, instead making things worse by being invested in the primary cause, which is our use of fossil fuels? When Canada signed the Paris climate agreement most people presumed that it was being signed honestly, not as an act of laugh-behind-your-hand hypocrisy.”—Guy Dauncey, The Practical Utopian

“Investing in the Trans Mountain Pipeline is similar from a health perspective to using public funds to invest the tobacco industry or the asbestos industry.” —Dr. Trevor Hancock, Canadian Association of Physicians for the Environment

“This is an affront on the rights of Indigenous communities and a giant step backwards in achieving Canada’s climate commitments. This project will increase total GHGs by as much as 27 megatonnes of CO2 annually, and green light continued expansion in the Alberta tar sands. It is far more than simply disappointing, it’s enraging…Today’s decision indicates that our rights, our values, and our people mean very little to today’s colonial government.” —Eriel Deranger, Executive Director, Indigenous Climate Action, member of the Athabasca Chipewyan First Nation

“Canada committed to honouring the UN Declaration and the right to free, prior and informed consent. First Nations have different positions on this project but they all agree and insist that their rights be respected, upheld, and honoured by the Crown….First Nations have for centuries used our own protocols and traditional ways to solve problems and broker solutions where we are on different sides of an issue. Canada must work with First Nations and respect our rights regarding our land and our lives.” —National Chief Perry Bellegarde, Assembly of First Nations

“They are declaring war on our people because we have said no. We have said no, no passage. You cannot bring this pipeline through our lands. I’m willing to go into a death, with my death song, into battle against Kinder Morgan right now.” —Kanahus Manuel, member of the Secwepemc Nation, to iPolitics.ca

“The future of this pipeline is anything but certain. In the courts and on the ground, the fight to protect communities, the climate, and the coast continues.” —Dyna Tuytel, Ecojustice

“The federal government’s commitment to purchase the Kinder Morgan pipeline is unhealthy public policy on both local, national and global level.” Locally, there is the potential for a catastrophic fire on Burnaby Mountain due to the proposed increased storage tank density. It is also still unknown how spilled diluted bitumen could effectively be cleaned up, and health risks of a spill include mental health impacts, cultural impacts for local Indigenous communities, respiratory illness, and potentially increased long-term risks of acute myeloid leukemia for community members exposed to volatile diluents.” —Dr. Courtney Howard, Canadian Association of Physicians for the Environment

“Your tax dollars are now committed to a 60-year-old pipeline, with an expansion project likely to cost billions more. This is a short-sighted decision! It doesn’t matter who builds the pipeline. It’s bad for the environment, the economy, the climate, Indigenous rights, and the long-term health of your country.” –Stephen Cornish, David Suzuki Foundation

“Kinder Morgan has wanted out of this project for some time, and over the last few months, the company has seemed closer every day to walking away from the project outright.  For me, it feels like a devastating blow to watch our federal leaders, who were elected on a promise to champion ambitious climate action and honour First Nations land and title rights, fight to prop up this environmentally and economically disastrous endeavour that was clearly in its dying days.” —Katie Harrison, Force of Nature

“It’s shocking that our government would do something so irresponsible with our tax dollars, despite industry insiders all saying that no investors would want to touch this project.” —Amelia Meister, SumOfUs.org

“It is unforgivable that the Canadian government and Canadian Prime Minister Justin Trudeau are doubling down on this project. The Trans Mountain pipeline expansion threatens to increase the transport of toxic tar sands oil through the Salish Sea seven-fold, and create a tar sands tanker highway off the West Coast. It would also worsen the effects of global warming, violate Indigenous sovereignty, risk poisoning water, and threaten the thousands of jobs that depend on clean coasts…because of the level of opposition, a pipeline company is walking away from this risky project. The Indigenous-led movement against pipelines everywhere is forming an unbreakable wall of resistance.” —Rachel Rye Butler, Greenpeace USA