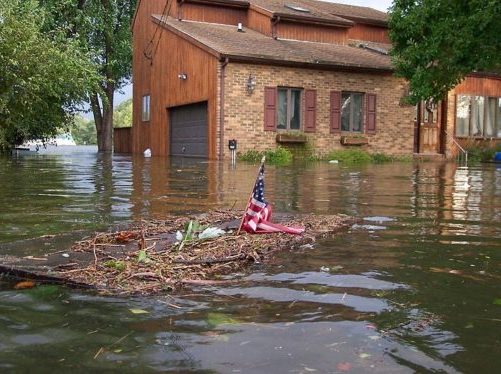 Climate change was one of the factors Sunday when the town of Ellicott City, Maryland endured its second “thousand-year” inundation in less than two years, with a flash flood bringing three to six inches of rain in just two hours and an estimated 8.4 in the course of the storm.

“To witness this disaster unfold again, less than two years after the previous flood catastrophe, is nearly unthinkable,” the Washington Post reports. “Call it Flood City, USA, for a location that has flooded 15 times at the hand of storms since 1768.”

The wider, three-hours storm dropped an estimated 9.6 inches of precipitation into a small region of central Maryland bracketed by Ellicott, Catonsville, and the campus of the University of Maryland Baltimore County. “But weather radars notoriously underestimate rainfall. Automated rain gauges in and around Catonsville, at ground zero, recorded nearly 13 to 15 inches of rain,” the Post notes. “The National Weather Service received a gauge report of 8.4 inches in Ellicott City.”

The Post coverage digs into the various factors behind the flood, including the anomaly that the region is “stuck in a late July weather pattern” while “vestiges of winter hang on”. The result was a low-pressure front that drew in air from all directions Sunday morning, with rising moist air producing rain that came down “more forcefully” through the afternoon warmth.

“Climate change did not ‘cause’ this thunderstorm complex,” the paper states. “However, climate change has probably altered the larger environment in which these small thunderstorms are embedded. Notably, the water vapour content of the atmosphere, as a whole, has increased, and scientific studies have shown a statistically meaningful uptick in the frequency of extreme rain events over the eastern United States. Statistically, over the long term, these types of extreme floods are probably becoming more common” as a result of global warming.

“The U.S. Northeast has seen the greatest increase in heavy precipitation of any region in the country,” tweeted climate scientist and Global Weirding video producer Katharine Hayhoe. “Why does this matter? Because that means more lives, homes, and livelihoods at risk.”