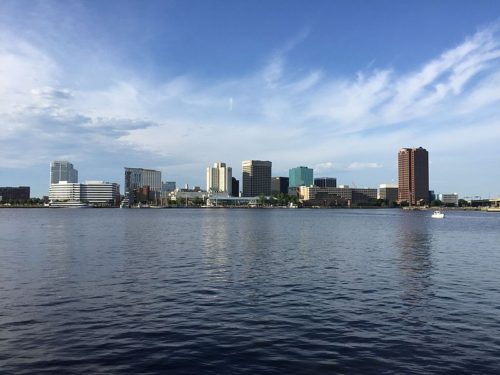 With rising sea levels already a clear and present danger, the city of Norfolk, Virginia is crafting a serious plan to keep its 400-year-old self afloat. But people living in its poorest neighborhoods fear they’ll ultimately be cut adrift to fend for themselves.

“Like many coastal cities,” writes InsideClimate News, “Norfolk has begun raising streets, installing pumps, and planning major floodwalls.” But city officials are determined to do more to adapt to the rising seas.

“This is a once-in-a-generation opportunity we’ve got, to keep the faith with all of the people in this city, and to elevate parts of this city,” said Norfolk Planning Director George Homewood. “I mean that in the physical sense and also a social and economic sense, part of the community that quite frankly has been left behind and forgotten.”

Chief amongst these “left behind and forgotten” places is a public housing development called Tidewater Gardens. Built in the 1950s, Tidewater consists of two-story buildings “arrayed in large blocks like military barracks,” InsideClimate notes. More than 95% of its residents are African-American and poor, with few shops or basic amenities within walking distance.

And Tidewater Gardens is aptly named. It’s located in a district called St. Paul’s that is “among the most flood-prone areas in a city with one of the fastest rates of sea level rise in the country—half a foot since 1992, about twice the global average.”

The response to that challenge comes from Vision 2100, an initial strategy for Norfolk to literally reshape itself into “the coastal community of the future”. It includes a plan to replace St. Paul’s with “a mixed-use, mixed-income neighborhood that would provide jobs, break up the concentration of poverty, and resolve flooding.”

As to where those jobs might come from, city councillor Andria McClellan said Norfolk officials realized “that climate adaptation could provide a vehicle for economic development” after meeting with a group of Dutch coastal resilience experts back in 2015. “Their technology around this is a huge portion of [the Netherlands’] GDP,” she told ICN. The research behind Vision 2100 got civic leaders thinking not only about fortifying areas at greatest risk, but also focusing on parts of the community that are relatively safe.

With that in mind, ICN explains, Vision 2100 “divides the city into four colour-coded zones. Green and purple represent relatively safe areas where the city should focus future development and improve existing neighbourhoods. The red zone—mostly downtown and the Naval base, and including Tidewater Gardens—are areas of dense development that need protection. The yellow zone represents the boldest move: areas where the city can’t afford to build expensive flood protection but must instead rely on some combination of adaptation and retreat.”

While the new zoning laws include tangible measures to combat the rising water, like requiring all new buildings to capture at least the first 1.5 inches of rainfall onsite, things get a lot less specific around the protection and relocation of the city’s poor communities. That uncertainty has been deepened by the “history of racism and injustice” that overlays the city’s climate adaptation conversation.

“In Tidewater Gardens, the city’s plan—replacing the development with a mixed-income neighborhood while ceding low-lying spots to open space—has residents and housing advocates fearing it will really amount to city-supported gentrification,” reports ICN.

While a planning document from last year waxes poetic about how “the crown jewel of the neighbourhood will be the transformation of the lowlands area that is often devastated by flooding into a water eco-centre comprised of great parks and green spaces,” it isn’t clear at all where the 4,200 people displaced by the plan will find new homes.

“After Norfolk knocks down St. Paul’s public housing, which it hopes to do in phases beginning in early 2020,” reports ICN, “it will not replace all 1,700 subsidized units,” offering instead “a mix of market rate and rent-controlled units” in privately-owned buildings.

All too aware that they live in a city with a “ history of demolishing housing for poor, black residents and not following through on promises to help them find somewhere better,” housing activists like longtime Tidewater resident Michelle Cook are both skeptical and vigilant, recently pressuring city council to ensure that any relocation plan will “include case management for each family” involved.

But much uncertainty remains, with Norfolk officials telling ICN they don’t know how they’ll cope if seas rise quickly. “We don’t have all the answers,” Homewood acknowledged. “The good thing is,” he added, “we’re beginning to ask the right questions.”