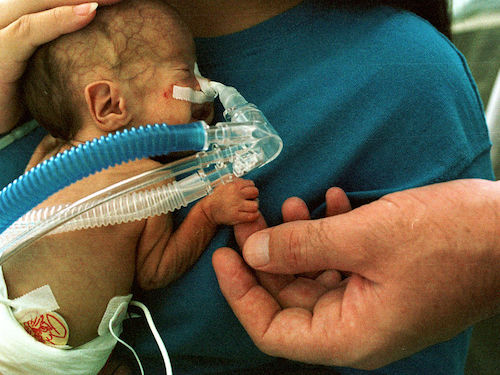 Rates of premature birth in California communities located near eight different coal- and oil-fired power plants began declining almost immediately when the plants were shut down, according to a recent study in the American Journal of Epidemiology.

The review of 57,000 births “found that the rate of premature births dropped from 7.0 to 5.1% after the plants were shuttered,” InsideClimate News reports. “The most significant declines came among African American and Asian women. Preterm birth can be associated with lifelong health complications.”

ICN notes that “coal and oil-fired power plants emit a bevy of air pollutants that have known negative impacts on public health—including fine particulate matter (or PM 2.5), nitrogen oxides, sulphur dioxides, benzene, lead, and mercury.” The eight closures included the TXI Riverside and Port of Stockton coal plants and the South Bay, Brawley, Hunters Point, Kings Beach, Portola, and Humboldt Bay oil-fired generators, all of which shut down between 2002 and 2011.

“The ah-ha moment was probably just seeing what a large, estimated effect size we got,” said lead author Joan Casey of University of California Berkeley. “We were pretty shocked by it—to the point that we did many, many additional analyses to try to make it go away, and didn’t succeed.”

After accounting for factors from Obamacare to the Great Recession to the 2000s housing crisis that could have been confounding influences, the study found significant drops in preterm births among women living within five kilometres of the plants.

Johns Hopkins University epidemiologist Noel Mueller said the focus on pre-term births to women of colour, who have higher rates of premature births, was particularly significant. “Studies like this highlight a potential role that environmental exposure might have in driving that disparity,” he told ICN. “I think that’s really important.”