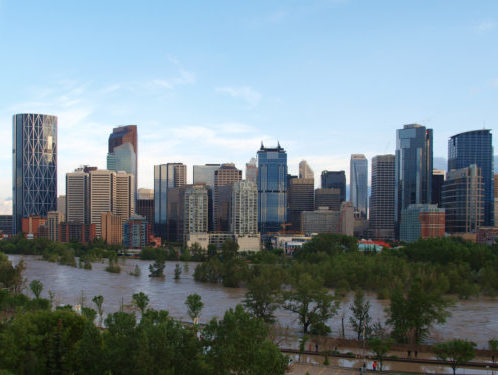 Canadian policy-makers who believe that the best—or, rather, the cheapest—way to deal with greenhouse gas emissions is to do nothing should consult recent data on weather-related insurance claims and the state of public infrastructure, the Conference Board of Canada advises in a recent Globe and Mail op ed.

Hodgson points to the rising burden of insurance claims in the wake of extreme weather events like forest fires and flooding.

“Canadian insurers are now facing claims on natural catastrophes—floods, forest fires, and other extreme weather events—of approximately C$1 billion annually,” he writes, citing the Insurance Bureau of Canada. That’s up $600 million from typical years in the past.

“Claims are expected to continue to increase, as is damage to personal property and public assets,” he adds. And “this aggregate number does not include smaller events that are not considered catastrophic (an event with total claims less than $25 million), so the full impact of climate change on Canadian insurers and clients is likely understated.”

Alongside the sharp increase in the value of insurance claims, there “has been a related dramatic rise in government funding and liabilities owing to flood damage and other catastrophic events.”

To help shore up the public purse and private wallets, “the federal government and private insurers are now engaged in discussions, along with other stakeholders, with the aim of enhancing access to affordable flood insurance coverage for most Canadians,” says Hodgson. Increasing private insurance against flooding “would help to share flood risk across many insured parties, and should presumably reduce the pressure on governments to act as the de facto flood insurer of last resort.” And anyone concerned about the government’s bottom line should bear in mind that spending money now on flood mitigation will mean far fewer dollars spent after the fact.

Hodgson urged policy-makers to recognize the huge toll that climate change will take on public infrastructure—from roads and bridges, to dams and sewers. “Existing infrastructure will require reinforcement and new projects will need enhanced design and construction to increase their resilience to torrential rainfall, high winds, and wild temperature swings,” he writes.

Even before building in essential resilience, many jurisdictions will first need to work on restoring basic functionality. “Canadian governments have systematically underinvested in public infrastructure for decades,” writes Hodgson—to the tune of some $141 billion, according to the 2016 Canada Infrastructure Report Card.