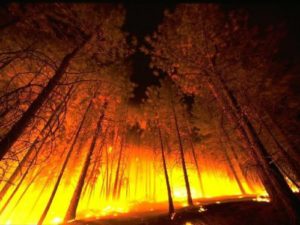 Wildfire season is just getting started in northern Alberta, but Bloomberg is already reporting on a recent outbreak that cut power to a “key pipeline in the oil sands”, creating enough disruption to produce a small surge in the price for Western Canadian Select crude oil.

“Inter Pipeline Ltd. is in the process of restoring service to parts of its Polaris Pipeline system after power was cut to the line’s Lamont Station on Sunday,” Bloomberg said Wednesday, citing a company release. “The line, which carried 194,000 barrels a day last year, supplies light oil from the Edmonton area to the Athabasca and Cold Lake areas of Alberta, where it’s used to dilute bitumen so that the heavy crude can flow freely through pipelines to refineries.”

The U.S.-based news agency notes that “wildfires are common in Alberta in the spring and summer months, with a massive one in 2016 burning down whole sections of the town of Fort McMurray and causing the shutdown of more than a million barrels a day of oil sands production.”