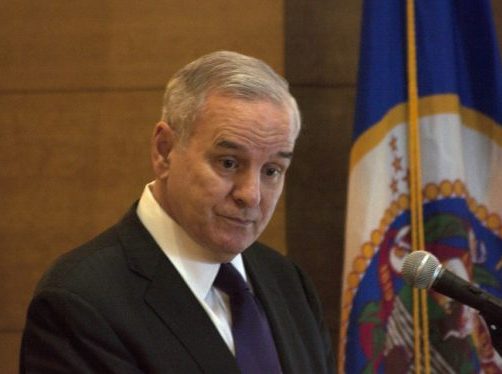 The bill to terminate the three-year regulatory review passed 74-51 in the Minnesota House and 35-32 in the Senate. But Dayton said the measure “would destroy the integrity of the process designed to protect the public interest that has been in place for 43 years.”

The Star Tribune notes that the existing pipeline “is aging, corroding and operating at just over half of its capacity due to safety concerns.” But “environmentalists and Indian tribal groups oppose the pipeline and the new route, saying it would open a new region of lakes, rivers, and wild rice waters to degradation from possible oil spills.”

With the Minnesota Public Utilities Commission due to rule on the project next month, proponents of the legislature bill are suddenly saying the review process has gone on too long, while opponents see the eleventh-hour effort as an end-run around the process.

In recent months, the project has received a rough regulatory ride. The PUC rejected a state environmental assessment for the pipeline in December. And an administrative judge’s blockbuster ruling in late April, which rejected Enbridge’s preferred route for the new line, was expected to introduce significant delays.

“There’s a ton riding on this project—not only for Enbridge, but for the whole basin, in general, in Western Canada,” Calgary-based analyst Patrick Kenny said at the time. “It’s a very important project.”