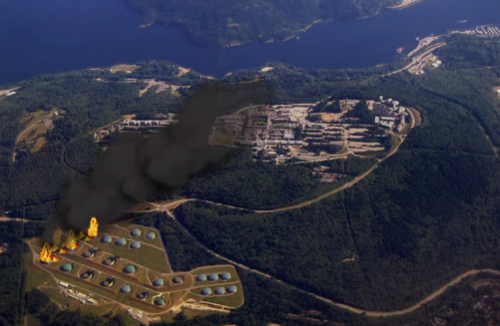 Folk singing legend Bob Bossin is out with two new videos opposing the Trans Mountain pipeline expansion—a 10-minute exposé on the acute dangers Burnaby and Simon Fraser University would face if Kinder Morgan’s Burnaby tank farm caught fire, and a four-minute performance that celebrates B.C.’s pipeline protests while bringing together some of the original members of the Stringband folk ensemble.

Bossin’s mini-documentary traces the history of recent tank farm explosions in different parts of the world, beginning with the Buncefield oil storage terminal northwest of London, UK, which caught fire on December 11, 2005. A series of technical failures led a fuel tank to overflow “like a Niagara Falls of oil”, Bossin says, and the droplets of oil combined with ice crystals in the cold winter air to form a vapour cloud.

An electrical spark from a firefighting pump ignited the cloud, just three minutes after the pump was activated, and “the explosion was heard in France, Belgium, and Holland,” he continues. “The fire spread to the other tanks, which also exploded. The fire burned for five days. The smoke stretched 100 kilometres.” Buncefield didn’t store diluted bitumen, but dilbit “is susceptible to its own kinds of fires and explosions,” with three major incidents on record in Israel, New Mexico, and Nicaragua in 2016 alone.

Bossin’s video shows an aerial view of the Kinder Morgan tank farm in Burnaby, the expanded footprint that would accompany the pipeline expansion, the location of Simon Fraser’s Burnaby campus on a ridge above the industrial site, the forested areas nearby, and the single road from the university that passes right beside the tank farm.

“If the tanks are on fire, there’s no escape route,” he says. “Almost certainly, the conservation forest would go up in flames, so it wouldn’t be a good time to be at Simon Fraser.” The tank farm is also built into a mountainside in an earthquake zone, so Kinder Morgan has promised to build its new tanks to the highest earthquake-proof standard. But it isn’t upgrading the existing tanks, “which is like waterproofing one side of your tent,” Bossin says.

“Odds are there won’t be a fire like that in Burnaby,” he adds. “But then, the odds were the same for all those other oil depots, as well. Nobody wants a fire like that, so they all do their best to keep the risk ALARP, as the regulators say, ‘as low as reasonably practicable’. But as they say up north, only one bear in 100 bites, but they don’t come in order.”

Ultimately, the problem is that equipment fails, lightning strikes, people make mistakes, and head office orders cutbacks and layoffs—so “if you’re going to handle millions of barrels of toxic, flammable stuff, you do it far away from town,” he says. “That’s what they do everywhere all over the world except here, in Burnaby, British Columbia.” The Burnaby Fire Department has warned that the current tank farm design “creates situations where firefighting is not possible, creating a very real risk of an inextinguishable, multi-tank fire event.”

In its review of the project, the National Energy Board received sharp critiques of Kinder Morgan’s risk projections for the tank farm, including testimony that the site would never have been approved in the UK or the European Union. But the NEB recommended the project and the Trudeau cabinet agreed, with the PM stating that “I wouldn’t have approved if it I weren’t sure it was safe.”