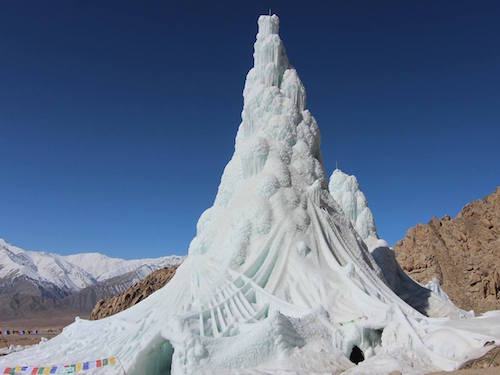 An ingenious artificial glacier design is bringing new hope to a desert in the foothills of the Himalayas, where water shortages brought on by climate change were threatening communities with drought.

In the past, the Ladakh region in northern India has depended on glaciers that formed at high altitudes and melted in the spring—an essential resource for an area that only receives 50 millimetres of rainfall per year.

But “lately, that cycle has faltered,” The Guardian reports. “Unnaturally high global temperatures threaten ice shelves everywhere—but researchers believe Himalayan glaciers are shrinking more quickly than any on Earth. Less water is reaching Ladakh’s farms and villages, and when it does, the volume of water from the faster-melting glaciers can break the banks of streams, causing floods.”

The artificial design by local engineer Sonam Wangchuk uses pipes, gravity, and nighttime temperatures to capture and freeze water vapour in a conical formation that maximizes the amount of ice that can be “grown”, while minimizing the surface area exposed to direct sunlight. That means the “ice stupa” keeps melting well into the spring, delivering up to 5,000 litres of water per day.

“It also has the benefit of resembling the Buddhist stupas—religious sites used for meditation and worship—that dot the landscape,” The Guardian notes. “Because it resembles something we have in our tradition, it is made more close to the population, to their hearts,” Wangchuk said.

The design, which won an £80,000 innovation prize from Rolex in December 2016, meets that criterion. The ice stupas “are formed by running pipes below the frost line, at which temperature the water hovers between a liquid and solid state,” The Guardian explains. “Then the pipes turn skywards, spraying the water into -20°C air, using the bitter cold to freeze it as it falls to earth.” Wangchuk’s first prototype, built in October 2013, lasted 18 days longer than expected. A much larger second effort kept a forest of 5,000 trees watered through the region’s driest season, until early July.

With the Rolex grant, Wangchuk was hoping to build another 20 ice stupas, each of them 100 feet high.