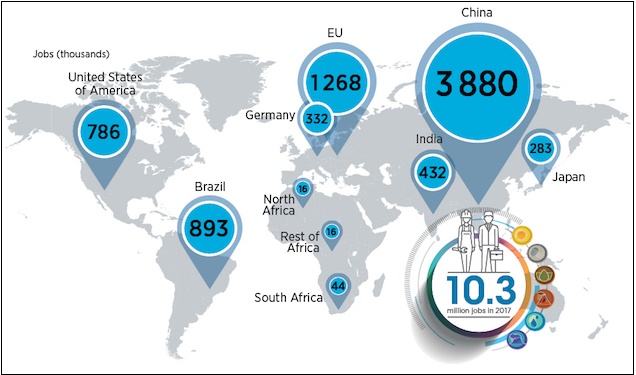 “Renewable energy has become a pillar of low-carbon economic growth for governments all over the world, a fact reflected by the growing number of jobs created in the sector,” said Executive Director Adnan Z. Amin. While the economic, social, and environmental benefits of renewable energy are “most evident” in countries “where attractive policies exist”, he added in a release, the 2016 result “supports our analysis that decarbonization of the global energy system can grow the global economy and create up to 28 million jobs in the sector by 2050.”

“The energy transformation narrative is one of improving economic opportunity and a rise in social well-being as countries implement supportive policies and attractive regulatory frameworks to fuel industrial growth and sustainable job creation,” said Dr. Rabia Ferroukhi, head of IRENA’s Policy Unit and Deputy Director of Knowledge, Policy and Finance.

With 3.4 million jobs, an estimated two-thirds of them in China, solar photovoltaics created the most employment of any renewable energy source, IRENA notes. “Despite a slight dip in Japan and the United States, the two countries followed China as the largest markets for solar PV employment in the world. India and Bangladesh complete a top five that accounts for around 90% of global solar PV jobs.”

Wind industry jobs were down slightly to 1.15 million, with 44% of the positions located in China, 30% in Europe, and 10% in North America.