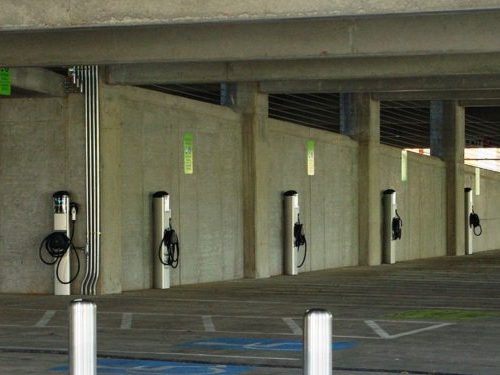 U.S. utilities have won the first round in an attempt by the Koch-backed Institute for Energy Research to attack electric vehicle programs through the secretive American Legislative Exchange Council (ALEC).

At a meeting late last week, “oil-backed groups” led by the IER “proposed a resolution that opposed state efforts to subsidize non-gas vehicles and allow utilities to charge customers for—or ‘ratebase’—EV charging stations,” Utility Dive reports. “It was tabled after a protracted floor battle and opposition from utility interests like Duke Energy and the Edison Electric Institute.”

The floor fight “shows how utility interests are diverging from those of the oil and gas sector in an era of low-priced renewable energy and proliferating electric vehicles,” adds reporter Gavin Bade.

“What we need to do is figure a [way to] work around the corporate rent seekers,” said Competitive Enterprise Institute Energy Director Myron Ebell, the climate denier who led the Trump transition team for the U.S. Environmental Protection Agency. “Groups like UPS and some of the utilities like Duke Energy and the Edison Electric Institute, we need to figure out a way to work around them.”

He’ll have his chance in November, when ALEC holds its annual meeting in New Orleans.

Utility Dive describes ALEC as a “private policy-making body for major companies and conservative lawmakers” that crafts model legislation for sympathetic elected officials to enact in their own jurisdictions. In 2013, a Brookings Institution study tracked a “strikingly high” adoption rate for ALEC’s drafts compared to other legislative bills.

In recent years, campaigners have pressed major companies to drop their pricey ALEC memberships over its opposition to climate action and support for measures that would limit pipeline protests.