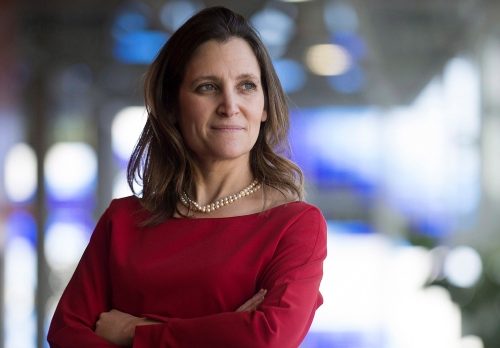 The moment has come for Foreign Affairs Minister Chrystia Freeland to step up as a climate champion, a group of four dozen environmental, labour, and anti-poverty groups said last week, as NAFTA negotiations between Canada, the United States, and Mexico approached an apparent make-or-break moment.

“If Canada wishes to be a climate champion and to promote prosperity and sustainability for all, its trade policy must support its climate objectives,” states the letter, signed by Climate Action Network-Canada, the Canadian Association of Physicians for the Environment, Citizens Climate Lobby Canada, Oxfam Canada, the Canadian Labour Congress, the National Farmers Union, and Unifor, among others. “The ongoing NAFTA negotiations present a unique opportunity for Canada to pursue a new model for more socially just, equitable, and sustainable trade.”

The groups call on Freeland to “adopt a dozen principles and values to promote a fairer agreement, including calls for the elimination of fossil fuel subsidies by all three parties, as well as a rule that prevents Canada from reducing its fossil fuel production, the protection of public services, and a gender analysis of the impacts of trade,” National Observer reports.

“Recent climate policy and objectives, such as those outlined in the Paris agreement, are in large part a global reaction to the irreversible damage inflicted by our current economic and trade systems and a far-reaching acknowledgement that the decarbonization of the global economy is essential,” the groups add. At home, “Canada’s current trade model negatively impacts the sustainability of our economy, our environment, and our communities. It jeopardizes the rights of Indigenous peoples, workers’ rights, women’s rights, and the right of communities to protect the air, land, and water they depend on.”