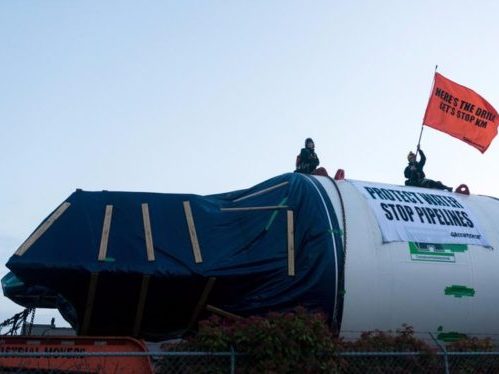 In just a fraction of the stories we’ve been following…

The federal government sought standing in the Horgan government’s reference case before the B.C. Court of Appeal in order to make arguments and present evidence in the hearing, CBC reports. “We are confident in Parliament’s jurisdiction and will intervene on the question in order to defend our clear jurisdiction over interprovincial pipelines,” Wilson-Raybould said. Previously, the Canadian Association of Petroleum Producers urged Ottawa to “exercise its constitutional authority and act in Canada’s best interests to move the project forward without further legal or political delays from the B.C. government.”

The two Greenpeace occupiers, Mary Lovell and Laura Yates, climbed Kinder Morgan’s Tunnel Boring Machine just before dawn last Thursday, then climbed down on their own Thursday afternoon. “We’re here in solidarity with Indigenous Water Protectors and Land Defenders who do not consent to the Kinder Morgan tar sands pipeline in their territory,” Lovell said. “We’re here because this pipeline poses too great a threat to the land, air, and water. We can’t let it go through—so we’re exposing the destructive drill Kinder Morgan would prefer to keep hidden away.”

Earlier in the week, the pipeline became a focal point during an Assembly of First Nations meeting in Ottawa. At a news conference Wednesday, chiefs from Manitoba, Quebec, and B.C. said the federal government may have misread Indigenous opposition to the project.

“I think we’re witnessing the beginning of what will likely become the largest civil disobedience in Canadian history,” said Khelsilem, an elected council member of the Squamish Nation in B.C. “Our people are willing to put our lives on the line.”

“First Nations across the country are watching, are going to see how this is going to play out,” added Grand Chief Sheila North of Manitoba Keewatinowi Okimakanak. “We’re also ready to come to the aid of First Nations and our brothers and sisters in B.C. and Alberta who are concerned about this.”

The same day, 133 Ontario First Nations issued a letter of support for the Treaty Alliance Against Tar Sands Expansion. “The Chiefs of Ontario agree to the immediacy of building a more sustainable future so our children do not have to rely or be exposed to fossil fuels which pollute and destroy the earth, air, and waters,” wrote AFN Regional Chief Isadore Day.

The more than 70 environmental, health, tourism, faith-based, and other social justice organizations that signed the letter to Trudeau called on the PM to reconsider federal approval for the pipeline.

“The national division this project has created throughout the country—not to mention the economic, environmental, public safety, and democratic risks—demonstrate the need for solutions that move us toward clean energy and help meet our climate commitments while also spurring economic activity,” said David Suzuki Foundation CEO Steve Cornish. “Civil society organizations care about addressing the climate crisis and leaving our children a safer, more prosperous society. We can do this by modernizing our economy and seizing Canada’s unparalleled opportunity to be a global leader on renewable energy.”

Meanwhile, the Trudeau government’s emerging plan to invest taxpayers’ dollars in the $7.4-billion project drew fire from one of the pipeline’s most ardent supporters. “I think everyone can agree, regardless of their political stripes, that the federal government investing tax dollars in an energy project is not the optimal solution,” federal Conservative leader Andrew Scheer told the Calgary Chamber of Commerce.

Scheer “said it’s absurd the situation has devolved to a potential government subsidy for a private company willing to spend its own money as long as it is confident it can proceed,” the Calgary Herald reports.