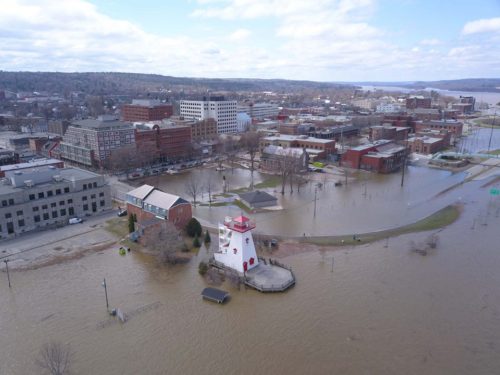 Heavily contaminated floodwaters in southern New Brunswick were expected to continue rising for several days, as a week of inundation reached “historic levels” and the provincial Emergency Measures Organization continued to urge people in affected zones to voluntarily leave their homes.

“Many sewage systems have been compromised by the unprecedented flooding in the southern part of the province, which started more than a week ago and is expected to worsen overnight Sunday with up to 20 millimetres of rain in the forecast,” CBC reports, citing EMO Director Greg MacCallum. “People need to be mindful that the water can cause sickness, such as gastrointestinal illness, and infections, and should take steps to protect themselves, such as wearing rubber boots and waterproof gloves.”

In the southern part of the province, the St. John River “has now swelled to 5.69 metres—nearly 1.5 metres above the flood stage—and is forecast to increase to 5.8 metres over the next couple of days,” the national broadcaster stated Sunday afternoon. That forecast placed projected water levels above a provincial record set in 1973.

“We know many people in the affected areas have seen floods before, so many peoples’ reactions may be to say, ‘Oh, we’ve seen this before,'” said Premier Brian Gallant. “We’re not sure that’s the case.”

The Canadian Coast Guard and the Department of Fisheries and Oceans (DFO) were standing by to provide emergency evacuations, flooding had forced 975 people from their homes, and more than 100 roads were closed. The Trans-Canada Highway between Fredericton and Moncton could be closed until next week.

In the north, MacCallum said the Madawaska River in Edmunston was rising “not dramatically, but to some extent,” due heavier water flows and higher river levels.

Toward the end of last week, DFO was already estimating financial damage from the floods at C$24 million, exceeding the record of $23.3 million set by flooding in 2008. St. John EMO official Mike Carr was urging residents to evacuate.

“It’s an evolving and, at some times, unpredictable event,” he told CBC. “We’re asking people to leave while they can.”

Earlier in the week, the province had asked about 2,000 residents in several neighbourhoods to vacate. “Anyone who has not taken the necessary precautions should act now to prepare for flooding and heed voluntary evacuation warnings from local officials, including those in at-risk areas who have never experienced flooding in the past,” the provincial Department of Justice and Public Safety said in a statement.