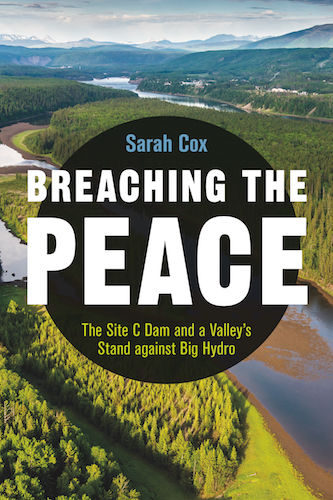 This is our second of two excerpts from Breaching the Peace: The Site C Dam and a Valley’s Stand against Big Hydro, by DeSmog Canada writer Sarah Cox. The book went on sale May 1.

The plight of the Peace region caribou was yet another indication of what First Nations had lost to the Bennett Dam. It served as well as a red flag for more than one hundred species vulnerable to extinction that would lose critical habitat to Site C…

Little in the world is as cute, and as endangered, as a three-week-old mountain caribou calf. I spotted the mocha-coloured calf from a platform in the trees, in a secret location in an alpine meadow. It looked like a German Shepherd puppy on stilts, with dark eyes, a dark muzzle, and pointy ears too large for its face. The calf took a single, high-footed step, then another. A third step drew it closer to its scraggly mother, who turned her big brown eyes in my direction.

Four other caribou cows soon raised their necks and swivelled leaf-like ears. One had dark scars raked across her back where hair no longer grew. A second calf unbuckled long legs to stand, and then two more appeared like tiny phantoms rising from the thick June grass. The click-click of a camera seemed to attract the ragtag herd. Curious, they ambled closer, and Naomi Owens, land director for Saulteau First Nations, gave us a nod. It was time to leave. As I scooted down the platform ladder, my view panned to an enclosure the size of four football fields. Black geotextile fabric encircled the pen, to prevent wolves and other predators from seeing the prey inside. The compound was ringed by a solar-powered high-voltage fence. Two First Nations shepherds, Steve and Ryan, stood guard around the clock, rifles at hand, on a lonely hilltop isolated by a washed-out road.

It had come down to this for the fast-travelling reindeer species, which were known to migrate more than 50 kilometres in a single day: an alpine corral with two daily feedings of domestic reindeer pellets. (Terrestrial lichens, hand-picked by volunteers, were fed to the caribou when they arrived and before they were set free.) Just as passenger pigeons had once been so plentiful that their flocks blocked out the sun, so had the caribou roamed the Peace in such profusion that First Nations elders remembered a sea of caribou like “bugs on the landscape.” They had once been a food staple for the Dunne-Za, providing sweet dried meat for winter and tasty marrow to spread on bannock, like butter or jam. They had also yielded hide for tents, moccasins, gloves, and leggings, babiche for lacing snowshoes, and antlers for tools such as ice chisels.

In the 1970s, after the Williston Reservoir severed the migration route for the southern mountain population of woodland caribou, their numbers fell so swiftly that Elders from the West Moberly First Nations issued an edict: no caribou could be hunted until their numbers rose. But the rebound never happened, and caribou numbers continued to plunge at an astonishing pace.

By 2016, according to the B.C. government, five of the six caribou herds in the south Peace region were imperilled. A seventh, the Burnt Pine group, had died out three years earlier. Another herd, the Klinse-Za (or Moberly) herd, had fallen precipitously from two hundred animals to just sixteen. The penning project represented one last gasp at survival for this herd—a costly life-support system that just might save it from extinction. The prognosis became morbidly clear when Owens, a biologist, explained that the eleven caribou cows and five newborn calves in the enclosure were not just from the Klinse-Za grouping. They were among the lone survivors of two herds: the Klinse-Za and the Scott. Only thirty-two caribou remained in one amalgamated herd, its members so precious that surviving animals were counted one by one…

After the Bennett Dam opened, industrial activity had invaded the caribou habitat, paring down the remaining populations. Logging, mining, oil and gas activity and, to a lesser extent, wind farms carved up the caribou terrain with roads, seismic lines, wells, pits, and platforms. Eighty percent of the Klinse-za herd’s range was disturbed by oil and gas activities between 2003 and 2012; other local herds saw up to 99 percent of their ranges impacted by the industry.

The West Moberly and Saulteau First Nations pleaded with the provincial and federal governments to take action, to no avail. Banking on the future restoration of caribou habitat, they devised their own plan to rescue caribou herds. They would capture pregnant caribou, airlift them to the pen, and hold them there until the calves were strong enough to have a chance of surviving in the wild. Willson said they had no other option. “It’s important to our people that we try and do something. We didn’t cause this situation, but we can’t stand by and watch what’s happening.”…

Following the destruction of the bison herds during the fur-trading era, and the near eradication of caribou following construction of the Bennett dam, moose took on heightened importance for the local First Nations diet and culture. At one time they were hunted with spear, club, snares, or bow and arrow; today, they are pursued mainly with rifles, on foot or horseback. Just one of the hefty ungulates can provide up to six hundred pounds of meat. A single tanned hide can be turned into almost a dozen pairs of hand-stitched and beaded moccasins to sell. Meat is turned into sausages, moose burgers, and steaks or sliced into fillets and smoked over a poplar fire. For special occasions, moose nostrils are cleaned to make a tasty soup with the consistency of clam chowder. Moose “horns” and hooves are used to make lamps and for decorative purposes.

As oil and gas development accelerated, hunters like Marvin Yahey, chief of the Blueberry River First Nations, noticed disturbing details about the moose they killed for food and that were increasingly hard to find. “Twenty years ago, moose were all over the place,” Yahey told me in 2016 when I visited a Blueberry River cultural camp. “Nowadays you have to go to the extreme to find one. You hunt for days, on foot, on horseback. The province claims that there’s a healthy population. Tell me where it is. I haven’t seen it. My Elders haven’t.”

When Yahey and other hunters did find a moose, it was rarely edible. “When we gut open those animals, there’s huge cysts and lumps on the kidneys and livers and cases where the animals have to be thrown away. The meat is all yellow and tarnished and smells like natural gas. How do you eat that?”

In Beaver, Yahey’s language, moose is called hutaaa. And from the chief ’s point of view, what had happened to the hutaaa symbolized everything that was wrong with the industrial development that now mantled his people’s traditional territory. Even the Blueberry’s reserves had been deeply impacted by development. After surrendering their original reserve near Fort St. John in 1945, when the land was granted to war veterans, the nation was forced off their second reserve in 1979 by a sour gas leak. Sour gas, or hydrogen sulphide, is sometimes released during gas drilling and fracking operations or when gas pipelines break. The colourless, odourless gas is so poisonous that even a small amount can kill people and animals. The leak was so dangerous that Blueberry members fled with only the clothes on their backs, and they were never able to return to their homes. Everything they left behind was destroyed, including their animals, pets, and personal belongings.

The government found a home for the nation at its current location, a reserve 80 kilometres northwest of Fort St. John. There, flares from nearby natural gas operations light up the sky at night, giving the reserve its nickname of “Little Kuwait.” The 250 community members who live on the reserve (an equal number live off-reserve) have purchased sour gas monitors to ensure they will have time to evacuate if there is another gas leak. They haul in drinking water because they do not trust their water supply, which they suspect might have become contaminated with harmful chemicals from the unconventional method of gas extraction known as fracking.

5/5/2019 I’m pleased with the way that theenergymix.com deals with this sort of subject. Generally to the point, often contentious, without fail thoughtful and more often than not quite thought-provoking.