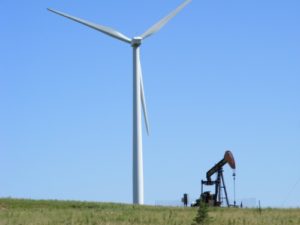 It’s time for oil and gas companies to develop “credible, transparent plans” to show investors they can “become part of the solution to climate change” and still stay profitable, former Exxon executive Bill Hafker argues in an opinion piece for CNBC.

“I worked in the industry for 36 years,” writes Hafker, who retired in 2016 as Exxon’s senior engineering advisor and environmental global technology sponsor. “I believe these companies have the technical skills, the financial scale, and the business savvy to successfully address climate change, if governments and investors step up as well.”

But “to make that happen, credible climate planning is needed, now.”

The pressure on the world’s biggest fossils has been building, with Exxon shareholders passing a resolution last year that called on the company to report on its plans for dealing with climate change. But shareholder and New York State Comptroller Tom DiNapoli has written to the company, declaring that report insufficient and asking for additional details. And Hafker says his former employer isn’t alone: A key problem in climate reports from both Exxon and Chevron is their assumption “that governments won’t succeed in meeting their Paris agreement commitments, resulting in financial outlooks that leave them free to sell all their fossil fuel assets.”

And “if oil companies don’t take steps to reduce emissions, then their prediction that governments won’t meet their targets is self-fulfilling. Worse, they set no targets for carbon emissions reductions.”

Hafker says company shareholders are looking for more. Taking the Paris targets seriously means “working out what they can emit, as part of a real effort to limit global temperature rise. Starting now, companies must set real targets for carbon emissions reductions and outline plans to achieve them.” With those targets in place, fossils must report their progress and related costs transparently, and remake themselves as “integrated energy companies” that deliver a menu of low-carbon energy options.

“If they do, they’ll help secure a sound, long-term financial future for a transformed energy sector,” he writes. “If they don’t, it’s not just the planet that will suffer, but dissatisfied investors may decide our energy future lies elsewhere.”

He also urges governments to introduce the carbon prices and other incentives that many fossils say they support.

“This would level the playing field, rewarding companies that take action,” he writes. “It is not enough for oil companies to sit back and wait for government action.”

Beyond going along with government incentives for climate action, Hafker says the fossil industry should demand them.

“Voicing support for a carbon tax through the Climate Leadership Council is good, but it’s time to start actively lobbying for such policies, and supporting politicians who will enact them,” he writes. “Despite their public declarations, a recent report by the 50/ 50 Climate Project found that many U.S. oil and gas companies were, in fact, doing the opposite, spending money to protect their traditional business models.”