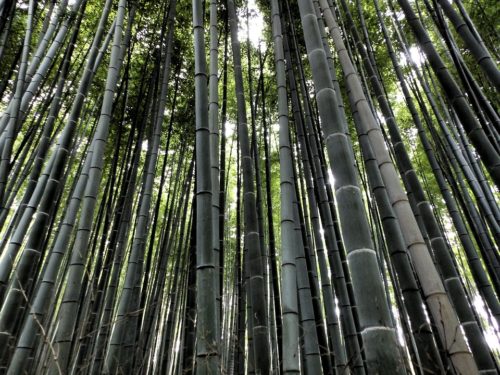 Increased cultivation and use of Bamboo places #35 on the Drawdown list of climate solutions, with potential to cut atmospheric carbon dioxide by 7.22 gigatons of carbon dioxide. It would cost US$23.8 billion, but savings of $264.8 billion by 2050.

Drawdown reports that bamboo is positioned to become one of the superheroes of carbon sequestration. It’s the fastest-growing plant in the world, and able to thrive in the most marginal of circumstances—it’s actually highly invasive and must be cultivated with care to avoid damage to native ecosystems. And bamboo sequesters carbon in both biomass and soil at very high rates: “Some species, in the right environment, are capable of sequestering 75 to 300 tons of carbon per acre over a lifetime.”

And bamboo matures quickly, can be harvested for pulp after one growing season, and is ideal for an extraordinary range of applications within four to eight years. As people in Asia have known for thousands of years, bamboo is a supremely useful plant. With the “compressive strength of concrete and the tensile strength of steel,” it is no less a superhero of construction, usable at every stage in the building process, in everything from bicycles to biofuels, paper to plumbing, animal feed to fabric.

Whether it’s in the ground, in use, or on the slash pile, bamboo holds tight to its carbon, Drawdown states. Its tissues contain tiny silica structures called phytoliths, whose mineral composition resists degradation far longer than organic compounds, hundreds and perhaps even thousands of years.

Drawdown’s calculation of 7.2 gigatons of carbon dioxide sequestered by 2050 (should an additional 37 million acres of bamboo be planted on degraded or abandoned land, for a total of 114 million acres world-wide) does not include the emissions avoided when bamboo is substituted for such high-emissions materials as concrete, steel, plastics, and cotton.