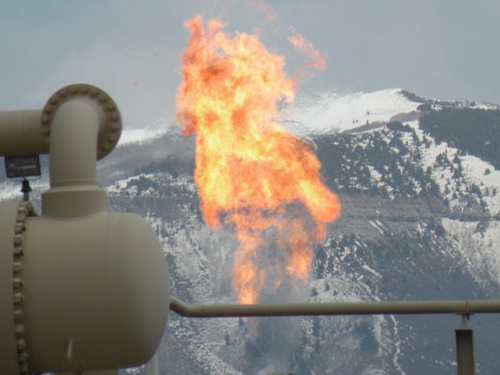 While fracked gas has become the predominant fuel in U.S. gas fireplaces and kitchen ranges, there has been little research into the potential health risks generated by any fracking chemicals in the extracted gas that are released into the air when it is burned.

“Few if any people have actually tested for what else is in this gas,” said Nathan Phillips, a Boston University earth and environment professor and gas leak expert. “It’s 90 to 95% methane, but what else?”

When they set out to answer that question, Phillips and his team discovered that “of the 108 volatile organic compounds, or substances that easily become vapours or gases, found in gas from four Massachusetts municipalities tested, 27 are chemicals that are considered hazardous by federal Clean Air Act standards, and 12 are suspected carcinogens,” BU reports.

The group’s initial findings were presented at a January symposium in Boston.

One obstacle to evaluating what is in a particular sample of natural gas is that, while some constituents like benzene occur naturally with methane, others are added, Phillips said—and the formulas for those additives are proprietary. “Different companies have their own recipes of substances that they don’t in many cases have to reveal,” he told BU. “We’re having to sleuth and reverse-engineer this weird mix of stuff,” and “it’s complicated to pull it apart.”

Another challenge researchers face is that extrapolating results isn’t a good idea, since “gas has a provenance—it comes from a certain place, and that makes studying it challenging,” he said. “I’d be careful not to assume that what we found in Boston corresponds to California or other areas.”

Co-researcher and Boston-based pediatrician Curt Nordgaard said the findings don’t address the implications of human exposure. “Right now,” he told BU, “we’re talking about the potential for health consequences, but in terms of how much and in what situations people are getting exposed, that’s a follow-up study.”

In the meantime, recalling his own involvement with the “mother of all gas leaks” last year in Porter Ranch, California, Phillips stressed the need to consider health impacts of natural gas outside the home, at sidewalk and street level. He also urged home cooks to be sure their kitchen ventilation works. “Sometimes fans don’t exhaust the air to the outside,” he cautioned. “They trap it, or sometimes it doesn’t go anywhere.”

Scheer Promises to Hit Paris Target with No Carbon Tax, Offers No Details