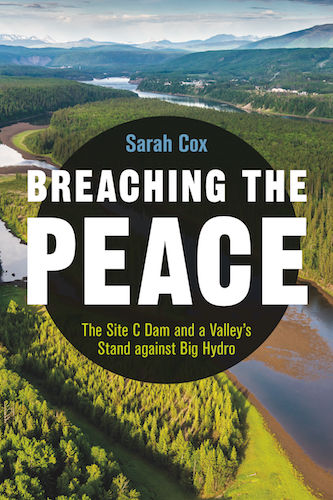 This is an excerpt from Breaching the Peace: The Site C Dam and a Valley’s Stand against Big Hydro, by DeSmog Canada writer Sarah Cox. The book went on sale May 1.

To understand Site C’s true impact on First Nations, you first had to look at the distressing impacts of the two existing dams on the Peace River, especially the Bennett Dam, which had been built without any consultation whatsoever with First Nations. BC Hydro itself acknowledged many decades later that the dam’s “social consequences were catastrophic as communities were cut off from each other, food sources disappeared, and traditional economies were wiped out.”

By all accounts, the lattice of rivers, canyons, estuaries, and forests that the Williston Reservoir destroyed had been of a wild, dizzying beauty. Beyond their visual and spiritual appeal, rivers like the Finlay and the Parsnip were used by First Nations as highways linking seasonal camps and kin, whom in more modern times they would visit in rafts and flat-bottomed river boats. When the Bennett Dam opened without their consent and the waters of the Finlay, the Parsnip, and eight other rivers and creeks began to rise, Indigenous people were stripped of far more than their links to relatives and culturally important places upstream and down. Some had to flee so quickly that they lost not just their homes but also the tools they needed to live off the land—the very tools that gave them some measure of security in life, such as animal hide scrapers that had been passed down from grandmother to mother to daughter.

Emil McCook, the former chief of the Kwadacha First Nation, one of the Sekani nations whose Rocky Mountain Trench homeland included the area around the Bennett Dam, was one of many people whose lives were put at risk when the churning waters of the rising Williston Reservoir submerged First Nations riverboats. McCook, then a teenager employed to ferry supplies, plucked a young boy from the treacherous waters after his boat had overturned.

Georgina Chingee, an Elder from McLeod Lake Indian Band, recalled “a really big noise,” the sound of the waters rising. “It was coming quite fast, and we were packing up, and we were trying to move up to higher land.” Members of Halfway River First Nation, children at the time, remembered seeing wooden boxes floating in the newly created reservoir. They were coffins from a flooded cemetery.

“The loss of the land in and around what is now the Williston Reservoir means that my children and grandchildren will not be able to see the grave of  my great-great-grandfather, because it is underneath that lake,” explained former chief Gerry Hunter from Halfway River First Nation. “I cannot take my grandchildren to show them where their roots are. The dams destroyed my great-great-grandfather’s resting place.”

The Williston Reservoir also flooded the villages of 125 Ingenika Sekani families, who were collectively given $35,000 in a deal sanctioned by the federal government. The families were shipped off to two “model” reserves hundreds of kilometres away, north of the mill town of Mackenzie, from which they fled three years later. From tarpaper shacks at Finlay Forks, the Ingenika (now known as the Tsay Keh Dene) were moved to the Parsnip Reserve, where, according to former Tsay Keh Dene councillor Jean Chalifoux, “everybody turned to alcohol…They may have given us these houses, but we have lost our culture, our spirituality.”

After visiting one of the new communities in the mid-1980s, Stephen Rogers, a former Social Credit cabinet minister, described living conditions among the Tsay Keh Dene as “the most primitive I’ve seen.” Terry Glavin, a Vancouver Sun reporter who travelled to the area not long after, found more than one hundred hunters and trappers living without telephones, electricity, or running water in “pinepole-and-plywood cabins scattered over three kilometres of a wooded promontory above the reservoir that had destroyed their former homes 20 years ago.” At the time, McCook told Glavin that “we want something left for our children, whether it’s in the new world or it’s in our own culture and tradition. That’s not asking much.”

For more than four decades, until Site C was resurrected, the BC government largely ignored one of the country’s most marginalized First Nations, living in a remote place most Canadians would never hear about, much less see.

Today, the Tsay Keh Dene live isolated at the northern tip of the Williston Reservoir, a ten-hour drive from Prince George. Children and adults alike endure rashes and respiratory problems from dust storms generated by the reservoir, whose banks continue to weaken and collapse with alarming frequency even after half a century. In 2016, Tsay Keh Dene paid exorbitant prices for food and depended heavily for their livelihoods on BC Hydro projects such as collecting and burning the logs that continued to float to the surface from the bottom of the reservoir, posing a hazard to barges and boats. The community disparagingly described these jobs as “almost like handouts.”

When Tsay Keh Dene proposed building a biomass cogeneration system using logs from the reservoir and from pine beetle kill, BC Hydro blocked the initiative, even though it would have created more than a dozen long-term jobs and provided the village with inexpensive heat and power, as well as a greenhouse to grow food. The Crown corporation rejected the nation’s energy demand forecast—a paradoxical outcome, given that a later independent review found that BC Hydro’s own energy forecasts were regularly inaccurate—and refused to enter into the power purchase agreement necessary for Tsay Keh Dene to secure debt financing.

As just one indicator of how much they have been relegated to obscurity, in 2017 neither the Tsay Keh Dene nor Kwadacha nations had hydropower. Instead, their electricity came from diesel generators. The Tsay Keh Dene had to endure brownouts and blackouts on a weekly basis. BC Hydro’s commitment to improve the accessibility of clean, reliable, and affordable power to First Nations communities in remote areas of the province, outlined in its Statement of Aboriginal Principles that had garnered so many accolades, appeared to extend only so far.

In 1999 Tsay Keh Dene launched a lawsuit against BC Hydro and the provincial and federal governments for damages arising from the infringement on their Aboriginal rights and the construction of the Bennett Dam and Williston Reservoir. Two years later, Kwadacha launched a similar suit. For years, both lawsuits crawled slowly through the legal system. Then, with Site C looming, the provincial government suddenly seemed eager to settle. In 2009, as the Campbell government geared up to announce publicly that it would seek regulatory approval for Site C, it reached a settlement with Tsay Keh Dene. The agreement provided the band with a one-time payment of $20.9 million and around $2 million a year thereafter. It also gave Tsay Keh Dene “direct award” BC Hydro contracting opportunities worth $6 million over a ten-year period and an annual $450,000 road maintenance contract to be shared with Kwadacha.

Kwadacha had inked an agreement in 2006, at a time when BC Hydro was commissioning the multitude of studies necessary to move Site C down the regulatory pipeline. The settlement awarded the nation financial compensation for what the government called “past injustices” related to the Bennett Dam and its reservoir: a one-time payment of $15 million and annual payments of around $1.6 million, with adjustments for inflation. The Kwadacha immediately began addressing a community housing shortage and improving living standards. The nation also planned to build a new arena and to found a guide-outfitting company with an ecotourism focus. Another provision in the agreement provided Kwadacha with opportunities for contract work related to the Williston Reservoir.

For Site C to proceed, BC Hydro also needed to create the impression that it had won over at least some Treaty 8 First Nations. The government knew that a First Nations blockade could slow down and perhaps even halt the construction of Site C. An image of First Nations Elders who had been dispossessed by the Bennett Dam standing in front of Site C bulldozers and logging machinery was not one that Premier Clark wanted seared on the minds of voters as the May 2017 provincial election approached. Nor did BC Hydro want to be viewed as unsympathetic to the difficulties facing Indigenous nations. So the Crown corporation set out to win over First Nations in a highly strategic manner that only a utility with deep pockets and concealed dealings could easily realize. Chief Willson, Napoleon, and other First Nations members bitterly referred to the strategy as “divide and conquer.” BC Hydro’s seemingly inexhaustible offerings of tens of millions of dollars, and of land and jobs—made with the full knowledge and support of the provincial government—split the First Nations apart.

India Pushes Ahead with Battery Storage for Renewable Grid