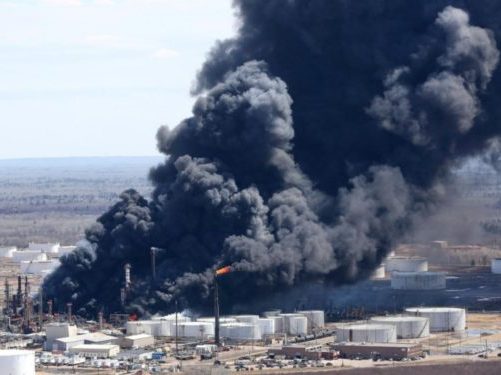 Homes, schools, and a hospital in Superior, Wisconsin were evacuated and 15 to 20 plant workers were reported injured Thursday after a crude oil or asphalt tank ruptured, exploded, and burned at a Husky Energy oil refinery and sent a plume of potentially carcinogenic smoke into the air.

“Anybody breathing that stuff should be very concerned about what’s getting into deep tissue, into the bloodstream,” said retired refinery inspector Neil Carman. “When you see that kind of smoke, it means you’re getting a lot of unburned hydrocarbons,” and “those particles are loaded with carcinogens.”

The evacuation in the town of 27,000 covered a five-kilometre radius around the refinery, plus a 16-kilometre corridor to the south.

“It was unclear how many people were being evacuated,” Associated Press reports. “The refinery is in an industrial area, but there’s a residential neighbourhood within two kilometres to the northeast. The corridor downwind to the south of the refinery is sparsely populated.”

The explosion took place around 10 AM local time. “A contractor who was inside the building told WDIO television that the explosion sounded like ‘a sonic boom’, and that it happened when crews were working on shutting the plant down for repairs,” AP states.

The fire was extinguished by 11:20, but then reignited. The evacuation order was lifted at 6 AM Friday. “All indications are that the refinery site is safe and stable and the air quality is clean and normal,” said Mayor Jim Paine on Facebook.

But AP cautions that the smoke plume from the explosion “almost certainly contained large amounts of toxins, posing a serious health risk to those living downwind.” Chemist Wilma Subra of the Louisiana Environmental Action Network, who has studied past refinery accidents, noted that asphalt “is a petroleum product that when burned emits chemicals in gaseous form and small particles that can linger long after the smoke dissipates,” AP states. The gases include volatile organic compounds (VOCs), that can cause symptoms ranging from dizziness to liver damage and cancer, as well as “microscopic particles of chemicals that stick together as visible smoke,” the news agency notes.

“Those particles carry cancer-causing benzene and other contaminants that can lodge deep in the lungs when inhaled. From there, they can pass directly into a person’s bloodstream.”

The refinery was built in the early 1950s and “has a processing capacity of around 50,000 barrels per day and a storage capacity of 3.6 million barrels of crude and products,” AP notes. “It processes both heavy crude from the Alberta oilsands and lighter North Dakota Bakken crude.” The plant was fined under its previous owners, Calumet Superior LLC, for emergency response and flammable liquids violations in 2015.