Tesla Learns the Limits of Automation After Deploying Too Many Robots, Too Fast 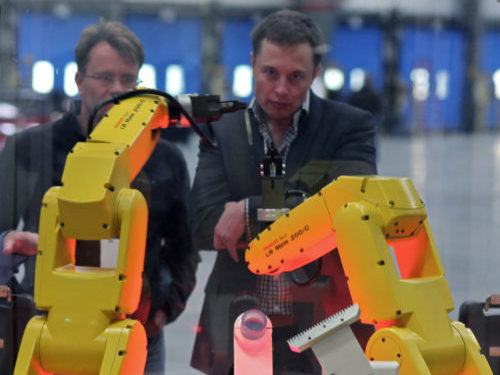 Tesla Motors founder Elon Musk could have avoided some serious production headaches this spring had he registered the cautionary tale of GM’s disastrous experimentation with robotics in the 1980s—and not tried to hot-wire the necessarily rigid protocols of large-scale auto manufacturing with Silicon Valley’s quicksilver creative process, writes Arstechnica.

Tesla’s recent shutdown in preparation for hyper-accelerated production throughout June “caps a nine-month period of turmoil that Musk has described as ‘production hell’ as Tesla has struggled to ramp up production of the Model 3.”

Significantly responsible for this “production hell,” the article contends, was Musk’s 2016 decision to follow the advice of former Audi executive Peter Hochholdinger and move full-on into robotic assembly.

“A year later,” Arstechnica writes, “Musk himself was touting Tesla’s advanced robotics expertise, declaring in a conference call last November, ‘we are pushing robots to the limit in terms of the speed that they can operate at, and asking our suppliers to make robots go way faster…It’s like if you can see the robot move, it’s too slow.”

“Musk now admits he was wrong about this,” observes Arstechnica’s Timothy B. Lee, citing the CEO’s recent mea culpa via twitter feed:  “Excessive automation at Tesla was a mistake. To be precise, my mistake. Humans are underrated.” [Yet many of those human are apparently at risk of serious injury in workplace injuries that Tesla seems less than eager to acknowledge.]

What Musk is belatedly realizing, writes Lee, is that “large-scale car manufacturing is really hard, and it’s not easy to improve on the methods of conventional automakers.”

That automation is not the “magic bullet” of efficiency was the hard lesson learned by GM in the 1980s, when the car company signed on to the vision of then CEO Roger Smith “for a ‘lights out’ car factory where robots would do the bulk of the work, allowing GM to produce cars more efficiently than anyone else.”

The perils of underrating the value of the human touch are made clear, Arstechnica notes, in a scene from GM’s automation project in Paul Ingrassia’s and Joseph White’s 1994 book Comeback, in which “the spray-painting robots began spraying each other instead of the cars, causing GM to truck the cars across town to a 57-year-old Cadillac plant for repainting.” Amid such robots-gone-rogue events, “GM spent billions of dollars on advanced robotics [throughout the 80s], but it never saw a return on that investment.”

A generation later, “Musk seems to have made the same mistake Smith did: bringing in way too many robots, way too quickly, leaving little time for testing and refining the process,” Arstechnica writes. Tesla claimed progress in a February blog post, reporting that the “number of labour hours needed to complete a vehicle has decreased 33% since early 2016.” Such progress may also owe to Musk’s belated epiphany that “the car assembly plant is not Silicon Valley,” writes Lee.

“Building cars at scale is one of the most complex and capital-intensive manufacturing tasks in the world. To cope with these challenges, carmakers tend to have a highly-regimented process for designing and building cars,” he adds. And, critically, “employees are expected to scrupulously follow policies and procedures to avoid disrupting the plans of their colleagues.”

But such necessary obeisance to a master plan “runs directly counter to the ethos of Silicon Valley,” which “tends to value creativity and rapid iteration” with a product, software, that “is so easy to modify and distribute to customers”. Unfortunately for Musk, who “earned his early millions in the software industry,” the ability of a software programmer to “change one line of code and then rebuild the entire project with the click of a button” just doesn’t work on the car assembly line.”

But Lee still sees a potential advantage for Tesla: While the company’s “frenetic pace of experimentation is not the most efficient way to produce cars in the short run,” he writes, “it might be the best way to learn the lessons Tesla needs to learn to produce cars more efficiently in the long run.” Add that strength to the company’s unrivalled battery and software expertise, its “intensely loyal fan base,” and its CEO’s formidable marketing talent, and it may turn out that Tesla, like Apple, is “insulated from the intense margin pressures most other carmakers face.”