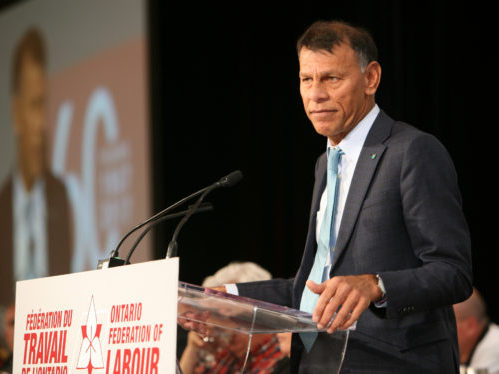 “If you are going to phase these jobs out, you have to take into consideration where these workers find new employment,” Yussuff told media. “What other skills might be necessary to allow them to adjust and adapt to the new reality of life?”

He added that “many of the jobs in coal facilities and mines are high-paying jobs. These are jobs where families can be sustained and, more importantly, people can have a decent living.”

“It’s a privilege to meet and join such a distinguished task force, and hear some of the stories from the four provinces with coal plants—their charm, their agony, and their pain,” Corbett said.

Yussuff and one of the other task force members, Alberta Federation of Labour President Gil McGowan, were at the centre of the effort to secure McKenna’s commitment to set up the task force and ensure financial support for laid-off coal miners, after the minister led the formation of the Powering Past Coal Alliance during last year’s UN climate change conference in Bonn. While 25 jurisdictions signed on in time for the official launch last November, Canada’s domestic commitments to a just transition had been having trouble shifting from discussion to action.

“In a nutshell, it looks like Canada is becoming a leader in just transitions in the same way that they’ve been a leader on climate change policy for the past two or three years,” McGowan said at the time. “We needed the minister to step up and make it clear that the government’s climate change initiatives included just transition, and the good news is that she has done that. Several ministries were making excuses for not moving forward, but now the minister has given her commitment that she’s the one who’s going to do that.”

The Task Force is due to report back to McKenna by the end of this year, after engaging with workers and communities affected by the coal phaseout.