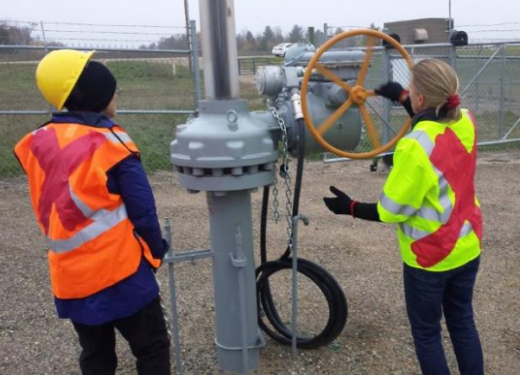 The four Minnesota “valve turners” who shut down two tar sands/oil sands pipelines from Alberta in October 2016 will be allowed to use a climate necessity defence when they go on trial for felony property damage later this year.

“The Minnesota Court of Appeals has upheld our right to present the facts on the ongoing climate catastrophe, caused largely by the fossil fuel industry, to a Minnesota jury,” said defendant Annette Klapstein. “As a retired attorney, I am encouraged to see that courts across the country seem increasingly willing to allow the necessity defence in climate cases.”

She added that “I hope it does mean more civil disobedience, because that’s the only thing we have left as ordinary citizens when our political system will not respond to a crisis that is actually threatening the very existence of our grandchildren.”

The court decision “allows the defence to call on climate scientists and other experts to explain the threat of climate change during the trial,” EcoWatch reports. A judge had already cleared the way for that defence in October, but prosecutors appealed the decision.

In this week’s 2-1 ruling, the appeals court said prosecution had failed to prove the necessity defence would have a “critical impact” on the trial. In a dissent, Appeals Judge Francis Connolly said the necessity defence does not apply “because there is no direct, causal connection between respondents’ criminal trespass and the prevention of global warming.”

On that basis, “this case is about whether respondents have committed the crimes of damage to property and trespass,” Connolly wrote. “It is not about global warming.”