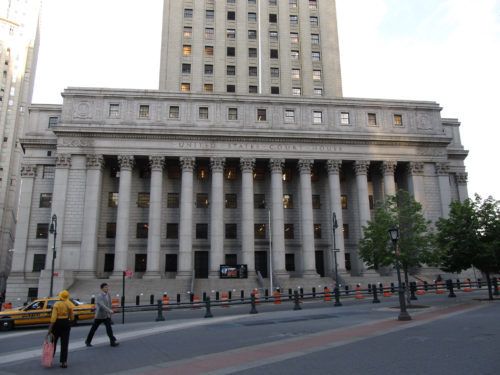 “A three-judge panel of the United States Court of Appeals for the 2nd Circuit threw out a decision, announced by the Department of Transportation (USDOT) last July, to postpone increases in the penalties that automakers are required to pay if they don’t meet efficiency standards under the Corporate Average Fuel Economy (CAFE) regulations,” InsideClimate News reports.

In what InsideClimate describes as “a hefty, inflation-matching bump intended to prod automakers to meet the standards for newer model years,” USDOT increased the penalty for exceeding federal emissions standards by almost 150% in the dying days of the Obama presidency. The Trump administration moved to delay implementation of the new rule last July, claiming that companies had already paid US$890 million in penalties. “Five states—New York, California, Maryland, Pennsylvania, and Vermont—and environmental groups sued, saying the administration had failed to provide adequate public notice, as required by law, and violated another federal law requiring civil penalties to rise with inflation.”

While the judges didn’t issue reasons for their decision, “the court acted very quickly. The case was only argued a week or two ago,” said longtime fuel efficiency advocate Dan Becker, director of the Safe Climate Campaign. “I think that conveys that this wasn’t even a close case.”

The U.S. Environmental Protection Agency estimated that the Obama standards “would prevent more than six billion tonnes of greenhouses gas emissions over the lifetime of cars sold in model years 2012 to 2025—more than one year of total U.S. carbon emissions,” InsideClimate notes. But “without effective standards, analysts say, the auto industry will likely backslide into making less efficient cars, with serious consequences for climate change.”