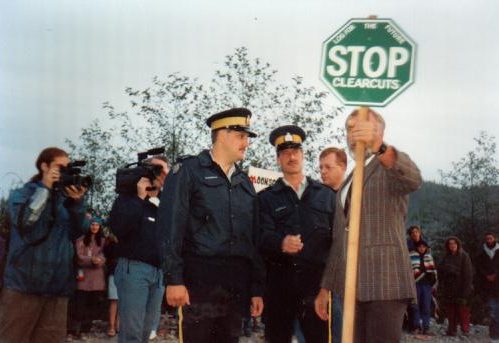 With more than 200 people arrested on Burnaby Mountain in the last month in protests over the Kinder Morgan pipeline, climate hawk Tzeporah Berman says she’s hearing some of the same blockade songs now that she remembers from 25 years ago, when First Nations and environmentalists united to stop clearcutting at Clayoquot Sound.

A quarter-century later, protesters are “not just protecting our land, but healing our society,” she writes, in a Globe and Mail op ed that explores the similarities and differences between the two movements.

At first glance, Canadians aren’t known for taking the law into their own hands, she notes. “But don’t mistake that compliance for indifference. Canadians are lauded as good global citizens, not because we blindly embrace the status quo and keep a low profile, but because we confront injustice, stand up for equality and rights, and punch above our weight when it comes to global-scale challenges.”

And “sometimes, injustice and inequality needs to be confronted here at home. The climate crisis and the systematic abdication of our responsibilities to First Nations are two of the greatest challenges facing Canada today, and they are intertwined with the high-stakes fight over the Kinder Morgan pipeline.”

Berman notes that “there are moments in history when our governments fail us—when they are too influenced by the next election cycle or those that stand to benefit from the status quo,” and this fight is about much more than a new pipeline project. “With 19 municipalities and the majority of the First Nations in fierce opposition (of the 150 impacted First Nations who were approached, only 43 agreed to support the project, leaving 107 First Nations opposed), something much more profound is at play: Our political and economic systems and institutions have swung out of balance and need reform. We need to face the challenge of climate change. And governments must recognize that Indigenous consent isn’t optional. It’s vital.”

All of which makes this one of the moments “when we are called to stand up. The power of the people to speak out, to demand better—it is the most powerful tool we have, and we will continue to use it.”

The big difference between Clayoquot Sound and Burnaby Mountain is that, this time, First Nations are leading the protests, with “much stronger legal and moral standing” than they had 25 years ago. “Those who block the gates of Kinder Morgan, facing down trucks, will cite the UN Declaration on the Rights of Indigenous Peoples as often as they mention the Paris climate agreement,” she writes. “Everyone knows and acknowledges that they are on the unceded Coast Salish land of the Tsleil-Waututh, Musqueam, and Squamish peoples.”

Berman stresses that the Burnaby Mountain protests aren’t about shutting down fossil production overnight. But “the science is conclusive—we must begin to replace fossil fuels with clean energy, or else create dangerous disruptions to everything we value.” That reality leads into some difficult conversations for a country that decided decades ago to begin ramping up its fossil fuel production.

While “we Canadians do like to get along with our neighbours,” she adds, “we’re not afraid to stand up when we know something is wrong, and we’re not easily fooled. Clayoquot exposed a rupture in our system, and many brave people sacrificed their freedom to help fix it. The mass arrests over Kinder Morgan likewise show that once again we face a serious imbalance—the focus on oil over all other interests.”

And after witnessing extreme weather and wildfires, floods and droughts, “we will fight against climate change with every breath in our bodies. For the sake of our children, we will give it everything we have.”