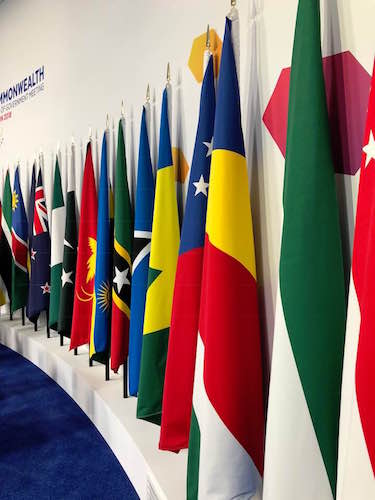 This story has been revised to include the critique from Christian Aid.

A fairer common future includes a sustainable development agenda, advocacy for small states, empowerment of the 60% of the Commonwealth population aged 30 and under, gender equality, and concern about climate change, vulnerability, and natural disasters, Commonwealth Heads of Government stated in a communiqué released Friday evening, at the end of their five-day meeting in London, UK.

In the lead-up to the meeting, Christian Aid issued a report that showed Canada, the UK, and Australia failing to deliver their fair share of climate finance, even though the UK and Canada alone could eradicate energy poverty across the Commonwealth by boosting their contributions. The report indicated that the UK alone is responsible for more greenhouse gas emissions per capita than 18 of its former colonies, while poorer Commonwealth countries over-achieve on their climate promises under the Paris agreement.

“The majority of poorer countries are the first and worst hit by climate change, but they’re contributing the least to carbon emissions,” said report author Mohamed Adow, Christian Aid’s international climate lead, in an interview with Climate Home News.

In their communiqué, the heads of government “expressed grave concern that without urgent action to mitigate climate change, reduce vulnerability, and increase resilience, the impacts of climate change could push an additional 100 million people into poverty by 2030,” the communique states. “Heads recognized that temperature and sea level rise and other adverse impacts of climate change are a significant reality and risk to many of the Commonwealth’s most vulnerable member countries.”

The statement reiterated Commonwealth countries’ commitment to the Paris agreement, called on members to ratify and implement the Kigali Amendment to ban climate-busting hydrofluorocarbons, and reiterated their commitment to the Green Climate Fund and this year’s Talanoa Dialogue at COP 24.

“Heads expressed support for a range of innovative financing solutions, both public and private, and including disaster risk insurance, to enhance adaptive capacity and boost resilience,” the communiqué states. They also “expressed deep concern about the increasingly devastating impact of natural disasters on people and property across the Commonwealth, especially among the most vulnerable and marginalized in society.”

But it was the Youth Forum declaration at the end of the conference that captured some observers’ attention as a much more specific call to action on key aspects of climate change. It calls on governments to support and finance youth engagement and training in the processes set up to implement the Paris agreement, and invest in training “a cadre of young climate scientists to mainstream youth priorities, with a particular focus on the disaggregation of findings and research on climate change across the Commonwealth” and in small island states. National governments must also advocate for green jobs for youth, facilitate sustainable agriculture programs that promote technology transfer, and equip youth with the skills, tools, and knowledge they need to enhance countries’ adaptation, mitigation, and climate resilience, the declaration states.

Renewables Must Scale Up Six-Fold to Hit Paris Targets, But Cost Savings Are Massive: IRENA