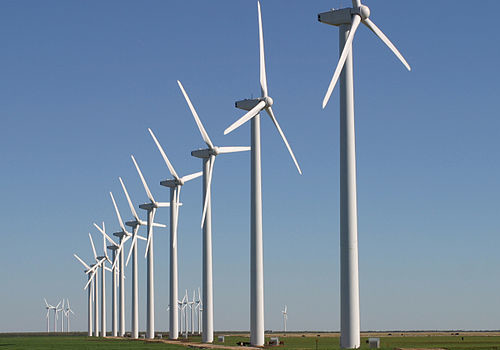 A small, rural school district in southwest Texas is introducing what may be the first wind turbine technician program for U.S. high school students, reflecting an education trend that has workers “climbing wind turbines to the middle class,” according to the Hechinger Report.

“Starting next year, students at Bruni High School will be able to take course work that will give them a jump start on an associate degree in wind, which they can finish at Texas State Technical College in Harlingen, 2½ hours down the road,” the non-profit independent news organization reports. “The students can even earn a certificate through the classes and go straight to work on the turbines.”

Those jobs are essential in what Hechinger describes as a “no-stoplight town” whose economy has depended on “a row of makeshift casinos” and the school itself since local oil production slowed down.

“We have very poor children who come from poor families,” said local rancher Robert Marshall, president of the Webb Consolidated Independent School District, whose construction business serves the oil fields. For many of those students, “none of the family have ever gone to college,” but “we’re giving them opportunities”.

In a report published jointly with NBC News, The Hechinger Report notes that clean energy is (still) the fastest-growing job sector in the U.S., with solar panel installer positions increasing most rapidly and wind turbine technician coming in second. The position pays a “solidly middle-class salary” of US$52,000, and industry experts say technicians “often earn a lot more”.

For a town like Bruni—and for future employees looking for a lower cost of living—one advantage in wind turbine jobs is that they’re “inherently rural”, Hechinger notes. “99% of wind projects are in rural areas,” said American Wind Energy Association senior analyst Hannah Hunt, “and more than 70% of the installed capacity is installed in low-income counties.”

So far, the 52,000 wind turbines in operation across 41 U.S. states and territories have helped generate 102,500 jobs, Hechinger notes, citing a 2017 report from AWEA. “Projects need engineers, construction workers, control room operators, site supervisors, and environmental assessors, among other positions,” writes correspondent Sarah Garland. “Analysts like Hunt say that even in places where there aren’t any turbines, most notably in sultry Deep South states, factories are cropping up to manufacture parts for the industry.”

Hunt added that some older factories have diversified “because they believe it’s a smart investment.”