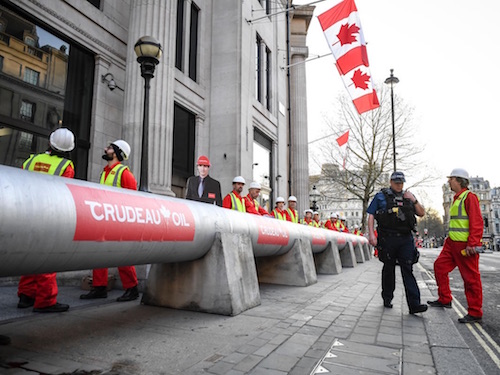 Kinder Morgan CEO Steve Kean took another step back from the Trans Mountain pipeline expansion, declaring the project “untenable” in light of the political tensions and sustained public pushback that predictably followed his April 8 demand that governments deliver some “clarity” for the company by May 31. “It’s become clear this particular investment may be untenable for a private party to undertake,” he told media, adding that the C$7.4-billion megaproject now faces “unquantifiable risk”. British Columbia Attorney General David Eby said he would file a reference case by month’s end with the provincial Court of Appeal to clarify its jurisdiction over the project. Natural Resources Minister Jim Carr vowed to counter Eby’s move with federal legislation.

“We assert the federal jurisdiction that has been asserted by us before, and it also has been commented upon by courts in Canada, including the Supreme Court,” Carr said. “I know other provinces, particularly Quebec, will be acutely interested in the federal government trampling on provincial rights—while we are trying to establish those rights,” replied B.C. Premier John Horgan. Toronto Star columnist Chantal Hébert said the federal response to Kinder’s ultimatum really shows how little power Ottawa has to force a province’s hand. The Globe and Mail’s Campbell Clark wrote that the raging legislative fight over the pipeline is really just “a political contest to look tough” between the federal government and two provinces.

The Trudeau government said it might try to find another company to take the project over if Kinder Morgan walks away. Greenpeace UK published a briefing that inventoried the risks and uncertainties the project creates for investors.

Équiterre Executive Director Sydney Ribaux said Kinder Morgan can expect years of uncertainty due to First Nations opposition to Trans Mountain. The Lower Nicola Indian Band, one of 43 communities that Kinder Morgan had identified as supporting the project, said it hadn’t made a final decision yet. “We’re still in dialogue with the company,” said Chief Aaron Sumexheltza. “Over the next couple of months, we’re going to have to make a decision whether our chief and council is going to sign off on a final agreement or not.”

Burnaby Mayor Derek Corrigan renewed his promise to use all available legal avenues to fight the project, and Burnaby lawyer Greg McDade said the National Energy Board’s handling of the file was “flawed” from the start. “As I listen to the debates on the so-called constitutional crisis, with Ottawa thinking about ramming this down B.C.’s throat,” he told StarMetro Vancouver, “the bottom line is we got here because the NEB process had no credibility whatsoever.” National Observer revealed that senior Natural Resources Canada sped up approval of the project in 2016, after Kinder Morgan Canada President Ian Anderson threatened to walk away.

Saskatchewan Premier Scott Moe said his province would follow Alberta’s example and table legislation allowing it to restrict oil exports to B.C. Two days later, a unanimous Supreme Court of Canada ruling on interprovincial liquor sales undercut the two provinces’ bid for retaliation, establishing that provinces cannot impose trade barriers if the purpose is to punish another province. “The court specifically noted that provinces are not allowed to impose tariffs, or rules like tariffs, to punish other provinces,” Eby said. “That’s exactly what we’ve been saying in response to Alberta’s proposed legislation,” The problem for Alberta Premier Rachel Notley “is that she’s given press conferences where she’s saying explicitly, ‘I’m going to punish British Columbia,’” added lawyer Shea Coulson, who represented five B.C. wineries in the “Free the Beer” case. “And the court literally uses the word ‘punish’ to say that’s something you can’t do.”

Prime Minister Justin Trudeau became the first Canadian leader to address the French Parliament, urging Paris agreement signatories to make the deal a “reality” and “seize the many possibilities for business and jobs offered in a carbon-light economy.” He added that it’s “up to us to ensure that our children and grandchildren can breathe fresh air and enjoy the great outdoors like we did.” iPolitics columnist Michael Harris [subs req’d] charged that Trudeau’s political vision only extends as far as the next election, pointing out that a pipeline had just spilled 290,000 litres of crude oil emulsion in northern Alberta. “So much for the theoretical aspect of pipeline ruptures,” he wrote.

About 450 business leaders, including OpenText co-founder Tim Bray, signed a letter opposing the project. “Saying ‘no’ to the Trans Mountain pipeline not only protects the hundreds of thousands of jobs in British Columbia that depend on a clean, protected environment,” Bray said in a release. “Saying ‘no’ is a crucial signal to companies, industries, and investors that we want to build the future in areas like clean energy and technology.” [Disclosure: The Energy Mix’s parent company and funder, Smarter Shift Inc., was one of the signatories.]

After a poll showed a small rise in public support for the pipeline, Dogwood Initiative’s Sophie Harrison pointed to near-universal opposition to a government bailout for the project, including 70% opposed in B.C. and Manitoba, and support for the notion at only 52% in Alberta and 51% in Saskatchewan. The lawyer for more than a dozen Burnaby Mountain protesters objected to the expedited schedule that B.C. Supreme Court Judge Kenneth Affleck set out for hearing the case. Affleck said he would not hear evidence on “whether the pipeline is an environmentally wise structure”.