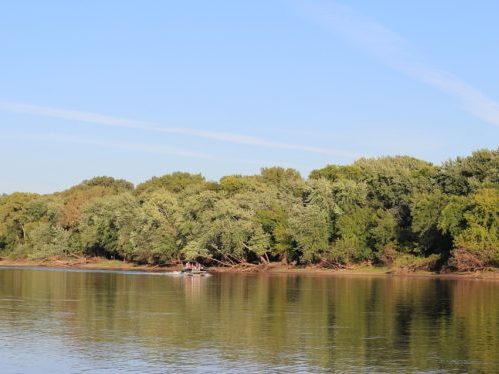 While Louisiana’s plans to shore up the Mississippi Delta by partially redirecting its river are being lauded, a new study published in the journal Science Advances offers little hope that anything substantial can be done to counter the eroding force of rising sea levels.

Focusing on a small sub-delta called the Lafourche, which formed from the steady accumulation of Mississippi River sediments more than 600 years ago, a team of geologists and environmental scientists from Tulane University, in collaboration with peers from other universities in the U.S. the UK, the Netherlands, and Austria, were able to “determine the rate at which the river naturally built up land by carrying sediments downstream,” the Washington Post reports.

“What we found was that, on average, it produced somewhere between six and eight square kilometers of land per year,” said Tulane geologist and study co-author Torbjorn Tornqvist.

Although some of that sediment is now trapped behind dams along the river, the Post states, “much still reaches the delta” and its wetlands. So the Louisiana Coastal Protection and Restoration Authority, using compensation funds received from BP after the Deepwater Horizon disaster, “is moving forward with two large sediment ‘diversions’ that within a few years could start channeling huge volumes of river water in new directions, in a bid to protect areas around New Orleans, in particular.”

But what will clearly be a Herculean task may also be a largely fruitless one, the newspaper states, since the current loss of wetlands far outstrips the capacity of the river to rebuild. The Tulane study puts the current rate of loss at 45 square kilometres per year, “or more than an acre an hour”.

A number of factors are driving this rapid erosion, including the practice of fragmenting wetlands into canals to support oil and gas infrastructure. But recent and rapid sea level rise, “now occurring much faster than it did when the Bayou Lafource land was built,” may be the coup de grace, writes Post climate specialist Chris Mooney

“The current rate is about 3.2 millimetres per year, and it is believed to be accelerating,” he notes. “When the Lafourche sub-delta grew, the sea level rise rate was 0.6 millimetres per year.” That rapidity is the game-changer, said Don Boesch, president emeritus of the University of Maryland Center for Environmental Science.

“Already, global sea level is rising many times faster” than it did when Lafourche was deposited, he said. “To have a fighting chance [at] maintaining some semblance of a functioning delta, the world must quickly eliminate greenhouse gas emissions to limit global warming and slow sea level rise.”

As for Louisiana’s delta recovery project, “we’re still convinced that these river diversions are basically the only real shot at getting something done in terms of coastal restoration,” Tornqvist said. “But “it’s going to have to be very focused on small and carefully selected parts of the delta. Very difficult choices are going to have to be made.”