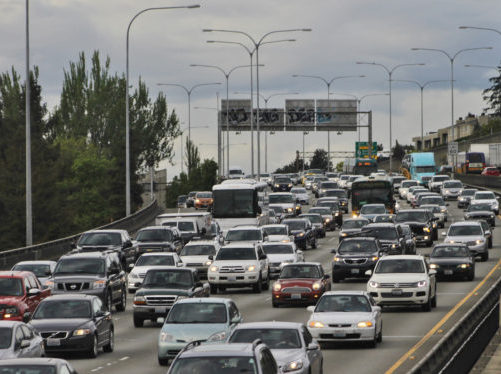 “Seattle officials have long claimed to be national leaders on climate change by slashing the city’s carbon dioxide emissions, even as the growing city’s emissions have stubbornly hovered around six million tons a year,” KUOW notes. Now, Durkan is trying to put some substance behind the goal, unveiling the outlines of her strategy just two days after Environmental Protection Agency Administrator Scott Pruitt announced his own plan to roll back Obama-era emission standards for cars and light trucks.

That decision, KUOW states, will “likely do more to accelerate U.S. carbon dioxide emissions than any of the other climate-harming actions the administration has taken.”

“In the time of Trump, if local governments, particularly cities, don’t lead, we as a country won’t meet our climate goals,” Durkan said. Congestion pricing “tops the list” of action items, KUOW notes. The city’s sustainability office told the station that “between deterring drivers and providing funding for less-polluting forms of travel, congestion pricing alone can knock 10% off all carbon emissions in the city, more than any other single policy in the works.”

While the 400,000 vehicles entering the city centre every day are far too many, “congestion pricing can’t stand alone as a tool to change behaviour,” Durkan noted. “You have to offer real alternatives to people so they will choose something other than their car.”

And since “disadvantaged populations suffer the most from climate change,” KUOW says the new policies would be designed to build a healthier, more just city. “Any tolling system on cars entering downtown would help fund expanded transit service and more electric vehicle charging stations in underserved neighbourhoods,” the mayor’s office said.

For evidence that congestion pricing works, Seattle is pointing to London, UK, where the approach reduced traffic volumes, sped up traffic in clogged central London by 30%, and boosted bus service by 40% in its first 10 years.

Durkan’s plan could make Seattle the first North American city to put a price on travel in its downtown core. Hard on its heels is Vancouver, which is “expected to release a report by the end of April recommending some sort of congestion pricing scheme for [its] central business district and bridges,” KUOW notes. In New York, by contrast, state legislators recently “declined to adopt a similar plan for cars entering Manhattan.”