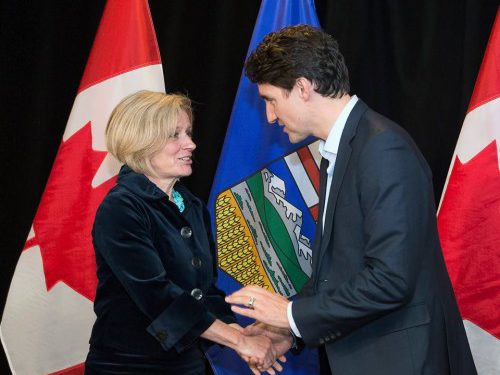 The high-stakes fight over the Trans Mountain pipeline expansion continued to escalate as the week drew to a close, with Prime Minister Justin Trudeau summoning the Alberta and British Columbia premiers to an April 15 negotiation in Ottawa, First Nations pointing out they’ve been largely ignored in the days since Kinder Morgan threatened to withdraw from the project, and Quebec warning that Ottawa forcing its will on B.C. would reflect poorly on Canadian federalism.

Meanwhile, veteran Toronto Star analyst Chantal Hébert is asking the ultimate question: What outcome would give Kinder Morgan the “clarity” it says it needs to step away from its threat to cancel the project on May 31?

Ahead of Sunday’s meeting in Ottawa, Premiers John Horgan of British Columbia and Rachel Notley of Alberta were making it clear they planned to stand firm in defence of their respective provinces’ interests. “The Trudeau government, meanwhile, has said it is considering all options to resolve the dispute, including potentially withholding federal transfer payments to the B.C. government,” National Observer reports. “Both the federal and Alberta governments have also floated the possibility of investing public money to buy a stake in the pipeline project.”

After a meeting Wednesday with federal Finance Minister Bill Morneau, Notley said she was confident Ottawa would soon take action to push the pipeline through. “I will say that he did assure me the Canadian government plans to take swift action on this file,” she told reporters.

With all three governments falling back to their standard talking points, it was up to the Star’s Hébert to ask what the Houston-based pipeliner, a descendant of the disgraced Enron empire, stood to gain from the week of chaos it had instigated with its April 8 announcement.

“What would an outcome, satisfactory enough for Kinder Morgan to resume work on the project by May 31, actually look like?” Hébert asked.

“Is its ultimatum merely a prelude to walking away from a project that has become less potentially lucrative in the wake of the election in the United States of a pro-pipeline president and the planned completion of two projects designed to link the Alberta oilfields to the American refineries? Alternatively, is the company essentially looking to minimize the risks to its shareholders by getting Canada’s pipeline-hungry governments to shoulder at least part of the risks?”

Either way, as Hébert and other commentators pointed out, the problem for Kinder Morgan and its political allies is that the tools available to the federal government to impose a settlement won’t win the community consent that Trudeau himself once acknowledged as a precondition for successful resource megaprojects.

“Even if one or more retaliatory federal moves against the B.C. government convinced the latter to wave a white flag, that would not deter demonstrators from picketing the pipeline work sites,” Hébert wrote. “On the contrary, the foreclosing of alternative avenues to fight the project could translate into more pipeline opponents turning to the streets and to acts of civil disobedience.”

And acceding to overheated demands from the likes of Alberta opposition leader Jason Kenney to withhold transfer payments to B.C. “would place the federal government on a slippery slope that would likely lead straight to a wall of provincial resistance, along with more litigation.” Quebec Premier Philippe Couillard, facing his own tough election fight this fall, tweeted that “it’s not a good sign for federalism” that Ottawa seems poised to take action against a province’s declared interest. The pressure on both Couillard and Trudeau amped up Thursday, when a coalition of 40 Quebec civil society groups issued an open letter calling on the federal government to withdraw its support for the pipeline.

“Given the breadth of opposition from scientists, local municipalities, federal MPs, the government of British Columbia, and residents of the province, as well as Indigenous communities on the route of the project and beyond, we believe that your government cannot continue to support Kinder Morgan’s pipeline without betraying that commitment and breaking your core promises on climate change, water protection, and the rights of Indigenous peoples,” the groups told Trudeau, Natural Resources Minister Jim Carr, and Environment Minister Catherine McKenna.

In the Globe and Mail, columnist Konrad Yakabuski noted that if Trudeau eventually forces Horgan to stand down, “the consequences for the federation will be just as far-reaching as if the federal government refuses to invoke its prerogatives despite B.C.‘s direct challenge to its authority. The Prime Minister needs to think long and hard on this one.”

Meanwhile, after several days of silence on the lack of Indigenous consent for the pipeline, several news outlets began focusing on the essential gap in the war of words among federal and provincial governments.

“They’re trying to sweep us under the rug wherever they can,” said Serge Simon, Grand Chief of the Mohawk Nation of Kahnesatake and head of the Treaty Alliance Against the Tar Sands Expansion. “They refuse to acknowledge that it’s the First Nations out west that are prepared to be arrested,” he added. “It’s all a matter of suppressing Indigenous rights.”

“The focus on the jurisdictional squabble with British Columbia is not reflective of all the significant issues involved in this situation,” agreed Grand Chief Stewart Phillip of the Union of B.C. Indian Chiefs. “Of course, I’m referring to the issue of the essential consent of the Indigenous people along the proposed pipeline route.”

In a Globe and Mail op ed, Phillip and Simon warned that Ottawa risks an Oka-style crisis if it tries to impose its will on Trans Mountain.

“As the federal and Alberta governments continue to pull their hair out over the B.C. government’s stand against Kinder Morgan’s Trans Mountain pipeline expansion and tanker project, it’s important to point out, as we’ve been doing for years, that the pipeline company doesn’t have the consent of all First Nations along the route,” they wrote. “Kinder Morgan’s recent announcement that it is stopping all but essential spending proves that its shareholders are starting to understand the degree and depth of the Indigenous-led opposition movement to this pipeline project.”

As a result, “Justin’s Trudeau government has a decision to make,” Phillip and Simon noted. “It can cut its losses and realize it simply made a mistake in approving the project. Or the Trudeau government can double down on its current path.” But beyond the failure in climate leadership that choice would entail, “it also means going back to colonial-era relations with Indigenous people. In fact, if the federal government tries to ram through this pipeline, it could mean going back to one of the darkest times in modern Canadian history: the Oka standoff with the Mohawk Nation.”

In a detailed analysis on Policy Options, Editor-in-Chief Jennifer Ditchburn pointed out that respecting Indigenous entitlements is not optional under Canadian law.

“The Crown has an obligation to consult with the First Nations whose constitutionally protected land and other rights could be impacted by the pipeline,” she wrote. “This fact now routinely fades in and out of our public discussions of Kinder Morgan like an inconsequential character in a daytime soap,” but “the government’s duty to consult isn’t some secondary story arc. The duty has been clearly laid out by the Supreme Court of Canada in case after case.”

That duty springs from the 2014 Tsilhqot’in decision, and from a series of court rulings since. “Many of the First Nations involved (and not just the ones in B.C.’s lower mainland) are arguing they were not consulted properly, that they were merely talked at by federal officials,” Ditchburn noted. “They are also raising the potential for future infringements of their rights, should there be spills from the pipeline.”

In that light, “to go on pretending that this question isn’t at the centre of the debate is to treat Indigenous people with the same dismissive, effacing attitude that has cast a shadow on our relationship for centuries. Ironically, it encapsulates why we are at this juncture in the first place—Indigenous rights are not taken seriously in the public sphere, nor are Indigenous peoples treated as genuine partners in the federation and in major projects.”