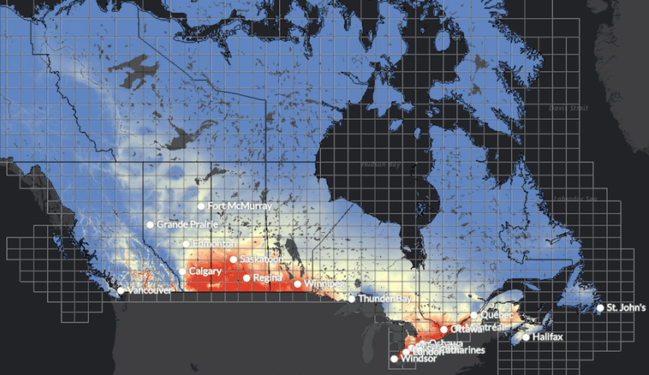 Consulate General of Canada in Chicago/Facebook

Interactive mapping and compelling storytelling are dual elements of a new Climate Change Atlas of Canada launched last week by the University of Winnipeg.

The atlas “includes documentaries of how Canadians are trying to adjust to present-day effects of global warming and a robust interactive map that lets users zoom down on any one of 2,000 towns or cities across the country, to see how climate change is likely to change local landscapes between now and the end of the century,” CBC News reports.

“We often talk about climate change as this thing that’s sort of in the far future that isn’t going to affect me, because it’s happening somewhere else,” said Prairie Climate Centre Co-Director Ian Mauro. “The Climate Atlas definitely shows people that this is something that will happen in our own backyard.”

Consisting of 250 layers and drawing on data from 12 global climate models, the atlas enables users to “hone in on any region and explore the area’s future climate,” CBC states. “For instance, they can learn how many additional hot days (defined as any day above 30°C) a community is likely to experience in the near future if greenhouse gas emissions continue to rise at current rates.”

Someone interested in Toronto, for example, will find that under this “business as usual” scenario, the city will see an average of 41 more days above 30°C in 2060 than it did between 1976 and 2005. At the other end of the scale, in what is currently the world’s fastest-warming region, Yellowknife will average 37 fewer days below –30°C in the next few decades.

The launch of the Climate Atlas is particularly timely, CBC notes, given a recent Abacus Research poll which found that, while 70% of Canadians “cited human activity as the main factor in climate change,” the other 30% chalked it up to “natural patterns in the Earth’s environment.” The poll also revealed that only 56% in Manitoba and Saskatchewan believe governments should do more to combat climate change.

“Climate change is real and it’s human-caused, full stop,” Mauro responded. “The quicker we can grasp this as a society, the better off we will be in terms of environmental sustainability and, ultimately, economically in the long term.”

While “this change could be considered scary,” he added, “there’s also really an opportunity to dig deep into our collective experience as Canadians and figure out how to drive solutions into our own local landscapes.”