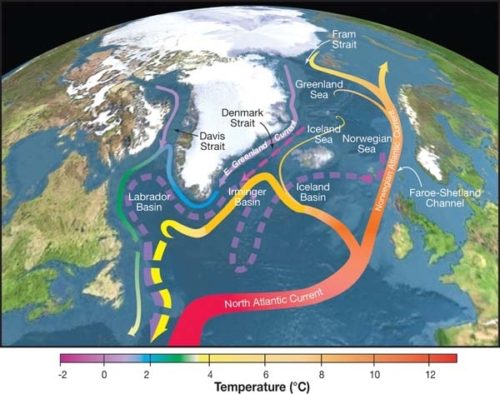 A key Atlantic Ocean current that carries warmth into the higher latitudes of the northern hemisphere has slowed down by 15% since the mid-20th century and hit a “new record low”, meaning that one of the most feared impacts of climate change may already be under way, according to a peer-reviewed study published in the journal Nature.

The slowdown in the Atlantic meridional overturning circulation (AMOC) is “something that climate models have predicted for a long time, but we weren’t sure it was really happening. I think it is happening,” said co-author Stefan Rahmstorf of Germany’s Potsdam Institute for Climate Impact Research. “And I think it’s bad news.”

The study means that “one of the planet’s key heat pumps, the currents which exchange warmth between the tropics and the Arctic, are weaker today than at any time in the last thousand years,” Climate News Network notes. “Earlier studies suggested strongly that any weakening of the AMOC would speed sea level rise on the U.S. east coast and cool northwest Europe by up to 5.0°C.”

A second study published in the same journal shows the AMOC at its weakest point in several millennia. “The last 100 years has been its lowest point for the last few thousand years,” said researcher Jon Robson of the University of Reading.

While the second study traces the shift in the AMOC back to natural causes around the dawn of the Industrial Revolution, both agree that the circulation has remained weak and weakened further as global warming has taken hold. “These two new papers do point strongly to the fact that the overturning has probably weakened over the last 150 years,” Robson said. “There’s uncertainty about when, but the analogy between what happened 150 years ago and today is quite strong.”

Citing the first of the two studies, the Washington Post notes that the 15% slowdown in the current means a decrease of three million cubic metres of water per second, the equivalent of nearly 15 Amazon rivers.

“The AMOC brings warm water from the equator up toward the Atlantic’s northern reaches and cold water back down through the deep ocean,” notes Post climate specialist Chris Mooney. “The current is partly why Western Europe enjoys temperate weather, and meteorologists are linking changes in North Atlantic Ocean temperatures to recent summer heat waves.”

On the other side of the Atlantic, the circulation is “critical for fisheries off the U.S. Atlantic coast,” Mooney adds. The fisheries are “a key part of New England’s economy that have seen changes in recent years, with the cod fishery collapsing as lobster populations have boomed off the Maine coast.”

Two oceanographers approached by the Post noted that neither of the studies was based on direct measurement of the Atlantic circulation.

“Essentially, what view you take of the results depends on how good you believe the models used are, and likewise how well the chosen proxies represent the AMOC over the time scales of interest,” said Meric Srokosz, of the UK’s National Oceanography Centre.

“I think by applying different methods and looking at different time scales, the two studies focused on different components of the ocean circulation,” added Marilena Oltmanns of the GEOMAR Helmholtz Center for Ocean Research in Kiel, Germany. “Both of them had to use some kind of approximation or proxy, which inevitably results in limitations and cannot give a complete picture.”