Sense of Control Can Inoculate Climate Deniers Against Conspiracy Theories 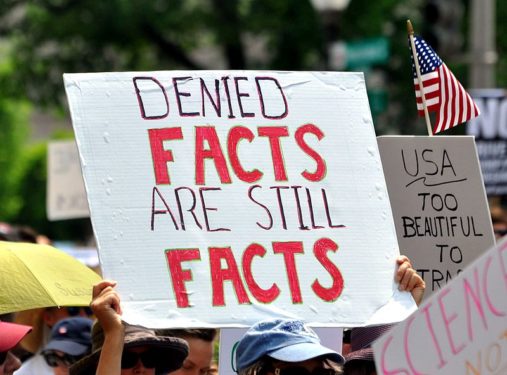 Chemtrails, rogue cloud-seeding experiments, and doubts about the legitimacy of climate science are standard fare for the conspiracy theories that drive parts of the climate change denial community.

(And just to get the obvious out of the way, to quote a recent Facebook meme—Earth is not flat, vaccines work, we’ve been to the moon, chemtrails aren’t a thing, and climate change is real. So let’s all stand up for science, beginning in Ottawa this Saturday at 11 AM.)

But even if the conclusions drawn by so-called “cloud truthers” and “climate truthers” sometimes border on the delusional, Grist Associate Editor Eve Andrews says it’s important to understand what drives them. And sometimes, as she recounts in her post, there’s room to reach out and open a conversation.

“Conspiracy theories are security blankets,” Andrews writes. “They protect those that uphold them from their own responsibility in the crisis in question,” whatever their specific fears are made of. And “while it’s tempting just to mock this type of thinking, climate-related conspiracy theories are actively counterproductive to climate action,” she warns.

“Although often parodied as inconsequential fantasies entertained by disenfranchised people on the fringes of society, conspiracy theories can influence what ordinary people intend to do in important domains,” concluded University of Kent psychologist Karen Douglas, in a study on conspiracy theories.

And once those beliefs take hold, “people will strongly hold onto their beliefs even in the face of contradictory evidence, so it’s difficult to imagine conspiracy theorizing decreasing,” Douglas told Andrews.

University of Bristol psychologist Stephan Lewandowsky, who studies the cognitive theory of conspiracy theories, said there are two ways people can respond to a problem as big as climate change.

“You can either accept the science and say, ‘we have to deal with this problem,’ and then look for the solutions least offensive to your worldview. Or you say, ‘the problem doesn’t exist!’ You deny the problem. The moment you do that, you have to figure out how to justify that to yourself.”

But Lewandowsky says a sense of control can help inoculate people against conspiracy thinking.

“I think if people know what to do about climate change, and they feel they can do this without hurting too much, chances are they’re less skeptical, less in denial of the problem,” he told Andrews.

“Even just saying: ‘We’ve already started to tackle the problem, but we need to increase our efforts even more.’ That is a more empowering message than, ‘It’s so big, it’s horrendous, and we haven’t even started solving it.’ If I tell you that, that’s very demotivating! That’s a tough ask!”