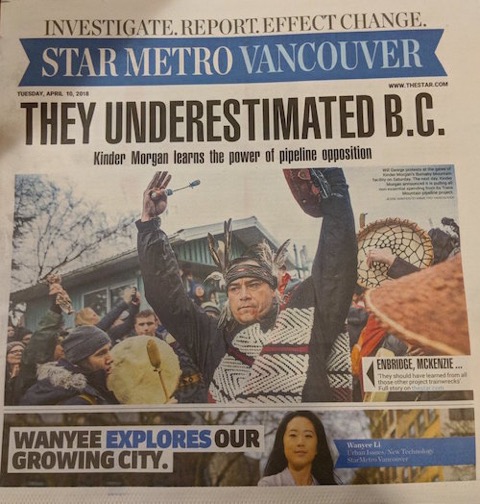 The reaction to Kinder Morgan’s decision to suspend construction on its Trans Mountain pipeline expansion became a frenzy early this week, with the federal Cabinet holding an emergency meeting, the federal and Alberta governments both offering to invest in the C$7.4-billion project, Premier Rachel Notley saying she’d buy the pipeline outright, and the CEO of a Houston-based pipeline company instructing a duly-elected government in Ottawa to take “some kind of preemptive action” against a duly-elected government in Victoria.

Along the way, the leader of Alberta’s far-right and hitherto free-market opposition party, Jason Kenney, endorsed the significant use of public funds to buy into a private sector project. A B.C. Supreme Court judge said protesters arrested at Kinder Morgan’s Burnaby Mountain construction site, including two federal MPs, should face criminal charges for the protest. And media began speculating about the legal action Kinder Morgan might take against the federal government if it doesn’t receive “clarity on the path forward, particularly with respect to the ability to construct through B.C.,” by May 31.

“Experts aren’t surprised by Kinder Morgan’s decision to pull back spending on the Trans Mountain expansion, saying it’s ‘highly unlikely’ the pipeline will be built in the face of enduring resistance and limited demand,” The Star Vancouver notes.

On Tuesday evening, Assembly of First Nations National Chief Perry Bellegarde “broke his silence on Kinder Morgan’s Trans Mountain pipeline,” iPolitics reports [subs req’d], “asserting that the decision-making process must respect rights, title and consent as laid out in the United Nations Declaration on the Rights of Indigenous People.”

Free, prior and informed consent “means First Nations have the right to say yes or no and to determine conditions for development in their territories,” he said. “As self-determining peoples with title and jurisdiction, First Nations must be involved from the outset of discussions and throughout the decision-making process. Together we must arrive at a process that respects rights, title, and free, prior and informed consent consistent with the United Nations Declaration on the Rights of Indigenous Peoples.”

And British Columbia Premier John Horgan said he was “concerned and surprised”, the Financial Post states, after Notley vowed Tuesday to introduce legislation to drive up already-high gasoline prices in B.C. by restricting oil flows.

“I’m always concerned when a jurisdiction to our east decides that they are going to take provocative action because of our attempt to talk to British Columbians about how we protect our environment,” Horgan said. “I don’t believe legislation that would put an adverse impact on the people of B.C. is in anyone’s interest and I’m surprised the government of Alberta is bringing it forward.”

Notley “is engaging in her own fear-mongering by alleging this amounts to a ‘constitutional crisis,’ ” added B.C. Green Party leader Andrew Weaver. “It is irresponsible to be throwing such inflammatory terms around when B.C. is simply trying to consult with British Columbians and to seek scientific evidence about a substance that poses a significant risk to our communities and to our economy.”

In a separate interview, Weaver stated that “this risk that B.C. is being asked to bear is simply not acceptable,” noting that Vancouver is “trying to brand itself as the cleanest, greenest city in the world at the same time as the government is trying to railroad a project through that would brand it as one of the largest exporters of heavy oil in the world.”

Earlier in the week, Notley said Alberta was “considering a number of financial options to ensure that the Trans Mountain expansion is built, up to and including purchasing the pipeline outright if it were to come to that, but it is not the only model we’re considering.” She added that she’d had a “very frank chat” with Horgan, in which she laid out the retaliatory steps Alberta would take in response to B.C.’s opposition.

After the two-hour Cabinet meeting Tuesday afternoon, Natural Resources Canada Jim Carr was emphatic that the Trudeau government stands behind the project, but gave few clues about the steps Ottawa might take to attempt to force the pipeline through. “We’ve been saying, for the last two days, we are prepared to look at many options,” he said. “That has not changed. We believe there are many options that will be of interest for the government of Canada. We’ll examine them all thoroughly.”

Asked whether he would consider withholding federal transfer payments to B.C., Finance Minister Bill Morneau said he’s not in the habit of making public threats. “We are, of course, in discussions with B.C. and Alberta,” he told media.  We are in discussions with the proponent, and we’re not going to negotiate in public.”

Prior to the federal Cabinet meeting, Carr also held out the possibility of a federal investment in the project. On Monday, as well, Prime Minister Justin Trudeau affirmed his support for the pipeline and said he’d had “a long conversation” with Horgan.

While the cascade of news coverage following the Kinder Morgan announcement focused almost exclusively on the reaction in Ottawa and Alberta and the intensifying pressure on B.C., at least one regulatory affairs expert suggested the Kinder brain trust has only itself to blame for underestimating the opposition it would face on the ground. The company “should have learned the importance of community support from the projects that failed before them,” The Star Vancouver writes, citing regulatory lawyer Bill Gallagher, “including Enbridge’s Northern Gateway project in northern B.C. or the much earlier Mackenzie Valley pipeline.”

“There’s a lot of strategic stupidity here,” Gallagher said. By now, Kinder Morgan is “so deep into it they have to devise a strategy that allows them to minimize their exposure and cut their losses.” But “they should have learned from those other project train wrecks: Having rights-of-way along your route is not enough. You have to win the support of communities.”

Tsleil-Waututh First Nation member Will George told The Star Vancouver that he plans to occupy the traditional Coast Salish Watch House adjacent to the construction site at Burnaby Mountain until the pipeline is “dead, dead, dead.”

Kinder’s announcement Sunday shows that “we’re costing them money, and that’s ultimately what we wanted to do, to get the investors to realize that this is a poor investment,” he said. “It is a small victory. But we’re not going to stop until this is absolutely dead.”

Exclusive: Outside the Bitumen Bubble