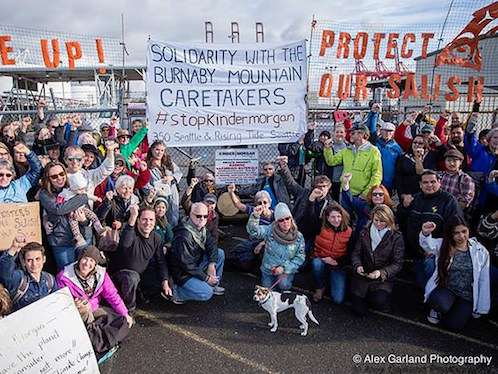 While the decision was difficult to make, added Kinder Morgan Ltd. Chair and CEO Steve Kean, “it is much better for everyone for us to be saying this now than it would be a year or a year and a half from now, after having spent billions of dollars.” He added that Kinder had made its decision at a moment when “the need for certainty becomes acute,” with its project spending about to ramp up to US$200 to $300 million per month.

“That level is unsupportable unless we are confident that we can finish what we start,” he told analysts.

In Calgary Sunday afternoon, Kinder announced it was suspending “all non-essential activities and related spending” and said it would consult stakeholders through May 31 on what it cast as two principles: “clarity on the path forward, particularly with respect to the ability to construct through B.C.; and, adequate protection” of Kinder Morgan (KML) shareholders.

The company has repeatedly said it would be “judicious in our use of shareholder funds,” Kean said in the release.  But “while we are prepared to accept the many risks traditionally presented by large construction projects, extraordinary political risks that are completely outside of our control and that could prevent completion of the project are risks to which we simply cannot expose our shareholders,” he added.

“If we cannot reach agreement by May 31, it is difficult to conceive of any scenario in which we would proceed with the Project.”

“A company cannot resolve differences between governments,” he added. “While we have succeeded in all legal challenges to date, a company cannot litigate its way to an in-service pipeline amidst jurisdictional differences between governments.” After spending C$1.1 billion on the project so far, “the uncertainty as to whether we will be able to finish what we start leads us to the conclusion that we should protect the value that KML has, rather than risking billions of dollars on an outcome that is outside of our control.”

In the news release and again in this morning’s analyst call, Kean acknowledged the strong support Kinder Morgan has received from the federal government and Alberta. But British Columbia “opposes the project consistently, and now with action, not mere words,” he said, initiating a process that could lead to restrictions on the flow of diluted bitumen through the pipeline. That decision will be made “in an unspecified court, in a proceeding that still, two months out, has not been initiated.”

After that, “the bigger question is, what’s next?” Kean added. “The action B.C. initiated a couple of months ago may very well not be the last thing we see,” and “we can’t build a project in the courthouse.” While Kinder Morgan has invested in Canada and in both westernmost provinces, he said, “it has become clear that this particular investment may be untenable for a private party to undertake.”

Kai Nagata of the B.C.-based Dogwood Initiative opened a triumphant email to supporters last night with the observation that “Kinder Morgan just flinched”, pointing to opposition from First Nations as a key factor in the decision.

“Kinder Morgan’s press release comes 24 hours after Grand Chief Stewart Phillip and allies from across the province blockaded Kinder Morgan’s tank farm in Burnaby,” Nagata wrote. “Phillip called Kinder Morgan’s bluff—and the company folded. The Texans refused to call police to arrest B.C.’s most prominent Indigenous leaders, choosing to lose a day of work instead. Today we found out why.”

The Kinder Morgan release said the company had already adopted a “primarily permitting” strategy for the first half of this year, awaiting “greater clarity on outstanding permits, approvals, and judicial reviews” before it began spending on full-scale construction. But “rather than achieving greater clarity, the Project is now facing unquantifiable risk,” with B.C.’s jurisdiction over the project “neither validated nor quashed” and the province threatening “unspecified additional actions” to stop the pipeline.

The various jurisdictional and regulatory uncertainties, “combined with the impending approach of critical construction windows, the lead-time required to ramp up spending, and the imperative that the company avoid incurring significant debt while lacking the necessary clarity, have brought KML to a decision point.”

Alberta Premier Rachel Notley said yesterday she could understand Kinder’s frustration at “not knowing how many more legal fronts they need to fight,” adding that the province would consider becoming a co-owner of the pipeline if that’s what it takes to get it built.

“We are calling on the federal government to act on behalf of Alberta and the pipelines,” she said, adding that B.C. would face “serious economic consequences” for opposing the project. “Maybe the government of B.C. feels they can mess with Texas—and who knows, maybe they can. But let me be absolutely clear. They cannot mess with Alberta.”

She added that “you can speculate as to the kinds of options that the federal government has. They’ve been using a lot of carrots with the B.C. government. At a certain point, maybe the stick ought to come into play.”

Natural Resources Minister Jim Carr immediately urged B.C. Premier John Horgan to “end all threats of delay” to the pipeline expansion, contending that “his government’s actions stand to harm the entire Canadian economy. At a time of great global trade uncertainty, the importance of Canada’s role in the global energy market is bigger than individual projects and provinces.”

The Globe and Mail editorialized late last night that Kinder Morgan’s decision creates an “economic and constitutional disaster” for Canada. “Ottawa can’t allow a provincial government to usurp its authority, as the British Columbia government is attempting to do by carrying out a guerrilla war against Trans Mountain,” the paper stated.

“Even more egregious is the B.C. government’s naked hypocrisy,” the Globe added. “Since taking power last summer, it has used its stated desire to protect the environment as a reason for delaying Trans Mountain. At the same time, however, it is supporting the development of the province’s natural gas reserves, offering tax breaks to a $40-billion project that includes, wait for it, a new pipeline and a new tanker terminal on the B.C. coast.”

In other words, “British Columbia will develop its lucrative fossil-fuel resources while stonewalling Alberta’s in the name of the environment. And it will do it while ignoring the Constitution.”

But Greenpeace climate and energy campaigner Mike Hudema called Kinder’s announcement a sign of what’s ahead. “The writing is on the wall, and even Kinder Morgan can read it. Investors should note that the opposition to this project is strong, deep, and gets bigger by the day,” he told CBC. “We encourage Kinder Morgan to shelve this project before the litany of lawsuits, crumbling economics, and the growing resistance does it for them.”

Last week, Prime Minister Justin Trudeau got a first-hand look at the mounting intensity of the Kinder Morgan fight, facing hundreds of protesters during visits to Victoria and Vancouver, and skepticism over his government’s climate and energy strategy on a stop in Fort McMurray, Alberta.

In Vancouver, an estimated 300 to 400 people marched from the Vancouver Art Gallery to a downtown hotel, where Trudeau was attending a $1,000-a-plate Liberal Party fundraiser. “This gives us a really unique opportunity to speak to him and remind him: Hey, Mr. Trudeau, you could be at risk of losing a few seats in the next election if you allow this project to go ahead,” said SumOfUs organizer Emma Pullman.

“In a time when we need to be talking about a transition and talking about reconciliation, the prime minister is talking about building a pipeline that’s going to be in the ground for 30 years,” she added. “There’s literally thousands of people who are opposed to it, many of whom are voters.”

“When he’s made a decision to push through a project ‘in the nation’s interest’, he’s making a decision to disregard the human rights of Aboriginal peoples,” said Chief Bob Chamberlin of the Union of B.C. Indian Chiefs (UBCIC). “This does not have First Nations consent, and we value the environment more than money.”

Tsleil-Waututh First Nation youth leader Cedar George-Parker interrupted Trudeau’s speech to the fundraiser, asserting that “the pipeline is not happening, the youth will stand up and stop it…You lied to the people. You lied to our people.”

“Thank you for your generous contribution tonight to the Liberal Party of Canada,” Trudeau replied. “Can we give a round of applause to this young man?”

As George-Parker left the room, Trudeau added that “if you were to stick around, you could hear me talk about how the environment and the economy go together, talk about how we know that building a strong future requires a broad range of voices.”

In response to about 100 Keep It In The Ground protesters in Victoria, the PM defended his approval of the 890,000-barrel-per-day pipeline by stating that “such decisions aren’t made by ‘those who shout the loudest,’ but are taken on the basis of facts, science and evidence,” Coast Mountain News reports.

“It’s about showing up, it’s about doing more than paying lip service to opposition to this very toxic, dangerous, dirty oil pipeline on the part of Kinder Morgan,” Phillip said. “This is not our first rodeo, so we’ll be here for a while.”

“What we need to do is move extremely rapidly toward renewable energy well before mid-century,” Klein added. “This project is totally incompatible with taking climate change seriously.”

Trudeau’s reception in Alberta was no friendlier than it was in B.C., with Athabasca Oil Corporation CEO Rob Broen chastising Ottawa for not providing regulatory certainty to get the pipeline built.

“I would tell him he has to show leadership on the pipeline file. And it’s not just words,” Broen told his company’s AGM in Calgary. “He needs to back up Kinder Morgan, the pipeline he’s approved, and he needs to see it through to construction and make sure we can put shovels in the ground and get it built for the benefit of all Canadians.”

Suncor Energy CEO Steve Williams agreed that “Canada needs to up its game” to draw fossil investment away from the United States, but declared himself pleased that “the prime minister has taken the trouble to come here and spend some time with us and understand our challenges better. So I think we’re going to get some help.” Trudeau was in town to tour Suncor’s new tar sands/oil sands mine at Fort Hills, near Fort McMurray.

The Canadian Association of Petroleum Producers, meanwhile, is campaigning around its warning “that there are about 50 changes to energy industry policies being contemplated by provincial and federal governments, including recently-proposed sweeping changes to the Canadian Environmental Assessment Agency and the National Energy Board, that are harming Canada’s reputation as a transparent and fair place to do business,” CBC reports.

While he was in Fort McMurray, Trudeau cast delays in pipeline approvals and mistrust of tar sands/oil sands development as legacies of former prime minister Stephen Harper’s scorched-earth support for the industry. “For 10 years, Stephen Harper’s government talked up the oilsands but couldn’t get it done,” he said. “Their lack of any sort of responsibility on the environment didn’t just hurt the environment, it hurt the economy.”