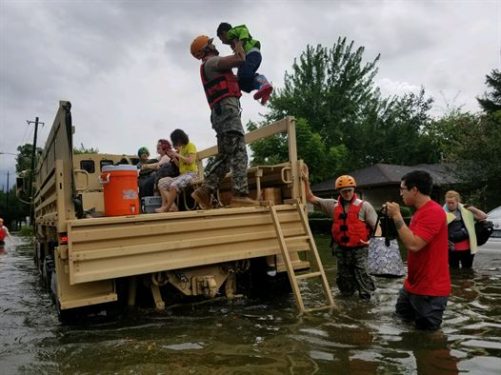 From its failure to immediately deploy America’s top disaster recovery expert, to a sluggish rescue and recovery operation, to the self-regarding callousness of its top elected official, the Trump administration’s response to hurricane-decimated Puerto Rico—compared to its exemplary service to hurricane-ravaged Texas—showed a disturbing bias against the island, according to a Politico investigation.

A “review of public documents, newly-obtained FEMA [Federal Emergency Management Agency] records, and interviews with more than 50 people involved with disaster response indicates that the Trump administration—and the president himself—responded far more aggressively to Texas than to Puerto Rico,” the Politico reports.

This disparity of reaction began with the initial failure to deploy the nation’s leading disaster response official to the island.

Mike Byrne, a former New York City firefighter, “has spent his career working in emergency management,” including oversight of a “$10-billion recovery program after hurricanes Katrina and Rita,” the paper notes. He also led recovery operations in the wake of Superstorm Sandy in 2013.

“So it came as no surprise to disaster recovery experts when Byrne was deployed to Houston on September 1, a week after Hurricane Harvey hit,” writes Politico Assistant Editor Danny Vinik. The surprise came 19 days later, when Hurricane Maria hit Puerto Rico and “FEMA named Alejandro De La Campa the FCO [federal coordinating officer], while it kept Byrne in Texas.”

While De La Campa, the Puerto Rican in charge of FEMA’s local office, is well-regarded, “he is not considered one of FEMA’s top disaster response leaders, much less the best person for one of the most complicated and challenging disasters in FEMA’s history,” explains Vinik.

“When I started hearing things, I was thinking there are a lot of heavy hitters sitting on the bench,” said Obama-era FEMA administrator Craig Fugate.

And it wasn’t just human heavy hitters who were “benched” in the days and weeks after Maria tore across the island and much of the Caribbean.

Although “within six days of Hurricane Harvey, U.S. Northern Command had deployed 73 helicopters over Houston,” Politico found in a review of FEMA records, it would be three weeks before an equivalent number were in Puerto Rico. And while “during the first nine days after Harvey, FEMA provided 5.1 million meals, 4.5 million litres of water, and over 20,000 tarps to Houston,” Puerto Rico received “just 1.6 million meals, 2.5 million litres of water and roughly 5,000 tarps” in the nine days after Maria.

Over the same span, FEMA approved US$141.8 million in individual assistance to victims of the Texas storm, compared to only $6.2 million for Puerto Rico’s ravaged citizens.

And whereas “it took just 10 days for FEMA to approve permanent disaster work for Texas,” writes Vinik, the same process took 43 days for Puerto Rico.

FEMA officials responded that “it was much easier to deploy helicopters to Houston than to Puerto Rico…which [was] 1,000 miles from the United States and had no working ports or airports immediately after the disaster,” Politico reports. But “main airports and ports were opened within a few days,” Politico states, and the “USNS Comfort, a hospital ship, didn’t even embark from Norfolk, Virginia to reach Puerto Rico and the U.S. Virgin Islands until nine days after the storm, despite the fact that few hospitals in the region had consistent power, leaving thousands of patients in dire medical condition.”

FEMA responded that “any comparison of the delivery of assistance between Puerto Rico and Texas is effectively impossible,” since “Texas is accessible by roads.”

While Puerto Rico’s geographic distance from the mainland U.S. no doubt made it a logistical challenge for aid efforts (and hence a job for a top emergency response manager), Politico says it was the island’s political distance from Washington that truly hamstrung those sincerely seeking to help.

“Hurricane Maria put the agency in an unfamiliar position, forcing it to take on the lead role in the response when it typically acts as a support agency, fulfilling requests from state and local officials,” Politico acknowledges. But even though “state and local governments didn’t always know what they needed or what they could even request” in the wake of Maria, FEMA did face similar confusion in the days after Hurricane Katrina. The key difference was that, after Katrina, “Congress gave the agency additional authorities to send commodities and help with the emergency response, even before it received official requests from local officials.”

But Puerto Rico, with “just a single, non-voting delegate in Congress,” had no one to “loudly deman[d] resources for their state”—unlike Texas, which sends 36 representatives and two senators to Washington, DC.

And where there is an absence of pressure from the state level, former FEMA officials told Politico, “presidential leadership plays a larger role.” Alas for Puerto Rico, that leadership was AWOL in the days and weeks after Maria.

“In public, Trump appeared much more concerned with the victims of Harvey than Maria,” Vinik recalls, and “was focused less on the details of the relief effort than on public appearances, repeatedly using conference calls and meetings designed to update him on the relief effort to direct FEMA Administrator Brock Long to spend more time on television touting his agency’s progress.”

According to Politico’s tally, Trump “tweeted just eight times about the island in the week after the storm, often to criticize Puerto Rico” and its elected officials. “In a three–part tweet  September 25, he said Puerto Rico ‘is in deep trouble’ due to its debt and infrastructure; during that same week, he tweeted 18 times about NFL players not standing for the national anthem.”

In stark contrast, in the week following Harvey, Trump was “laser focused on the storm, tweeting 24 times about the relief efforts in Texas and repeatedly praising the first responders.”

Such public messaging, said Jeremy Konyndyk, USAID’s top disaster response official under former President Barack Obama, “sends a signal to the whole federal bureaucracy about how they should prioritize.”

On a separate track, Trump handlers asserted that an official visit to Puerto Rico would have “required that rescue and relief efforts be temporarily redirected [to security measures], which is not what the president wanted.” James Norton, a senior official in the Department of Homeland Security under former President George W. Bush, retorted that, as his own boss learned the hard way, “public appearances and visits to storm-wrecked regions play an important role in establishing priorities within the federal government.”

“That type of executive attention drives the bureaucracy,” he told Politico.

If the long aftermath of Hurricane Maria is any indicator, the tone of the initial response also helps determine the road ahead. “Six months after Hurricane Harvey,” reports Politico, “Texas was already receiving federal dollars from FEMA for more than a dozen permanent projects to repair schools, roads, and other public infrastructure that were damaged by the storm. But for Puerto Rico, FEMA has so far not funded a single dollar for similar permanent work projects.”

This lack of investment, writes Vinik, “is a result of Puerto Rico’s decision to use an experimental formula for calculating the federal funds allocated to rebuild its public infrastructure,” a formula that will allow the island “significant flexibility during the rebuilding process, but…also requires [it] to pay for any cost overruns, a burden that doesn’t apply to Texas, where FEMA will pay for any excess costs.”

Vinik adds that, “for a cash-strapped territory like Puerto Rico, making the decision to use the new formula across all rebuilding projects is a somewhat surprising gamble.” But “according to multiple congressional officials and people with direct knowledge of the arrangement, the island was forced to take that gamble.”

“No two hurricanes are alike,” Politico concedes, “and Harvey and Maria were vastly different storms that struck areas with vastly different financial, geographic, and political situations.” Even so, “a comparison of government statistics relating to the two recovery efforts strongly supports the view of disaster recovery experts that FEMA and the Trump administration exerted a faster, and initially greater, effort in Texas, even though the damage in Puerto Rico exceeded that in Houston.”

Which in turn bears out the experience and “fear shared by many in Puerto Rico who, now more than ever, feel like second-class citizens,” Politico concludes.