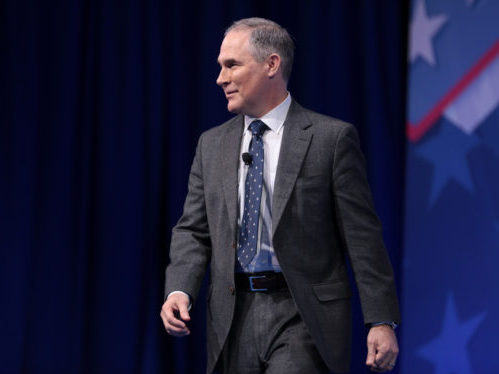 Embattled U.S. Environmental Protection Agency Administrator Scott Pruitt declared himself “dumbfounded that that’s controversial” in an interview earlier this week, amid intensifying scrutiny of his agreement to rent a Capitol Hill apartment from the wife of a well-connected Washington pipeline lobbyist for a mere US$50 per night.

“If you’re looking for a $50-per-night room near the United States Capitol, you’d better be ready to sleep in a bunk bed or on a floor mattress,” the New York Times notes. An exposé by Climate Desk reveals that the lobbyist, Williams & Jensen partner J. Steven Hart, was representing Enbridge’s Alberta Clipper pipeline, a project that Pruitt’s EPA ultimately approved.

“Williams & Jensen was a registered lobbyist for Enbridge at the time, the Times reported. However, a spokesman from the firm told the newspaper that Williams & Jensen did not lobby the EPA or Pruitt on the project’s behalf,” states a Climate Desk report carried by National Observer.

Nevertheless, “Democrats have called for an investigation by the agency’s inspector general,” Politico Morning Energy notes, “and even a few Republican members of Congress have called for Pruitt’s dismissal.” Donald Trump “has offered muted support to one of the most loyal members of his administration—‘I hope he’s going to be great’—but Pruitt’s future is not necessarily assured, according to White House aides.”

On Wednesday, the Times states, a reporter asked White House Press Secretary Sarah Huckabee Sanders whether Trump is “OK” with Pruitt’s unconventional lodging arrangement. “The president’s not,” she replied. “We’re reviewing the situation. When we have had a chance to have a deeper dive on it, we’ll let you know the outcomes of that, but we’re currently reviewing that here at the White House.”

A day earlier, “Tuesday dumped another batch of less-than-ideal news stories for the administrator, including a report that Pruitt used his authority under the Safe Water Drinking Act to give significant raises to two of his closest aides without White House approval, as well as hire at least two former lobbyists and several other aides for non-critical positions,” Morning Energy states.

The Times story includes a recap of Pruitt’s profligate first class air travel habits—brought on, he claims, by an interest in avoiding any unpleasantness with environmentalists or other citizens he might encounter in public airports.

The pressure on Pruitt comes in the same week that he launched a rollback of Obama-era emission reduction and fuel efficiency regulations for cars and light trucks, and announced a challenge to California’s authority to set its own fuel economy standards. That effort has already drawn opposition from 11 state attorneys general and more than 50 U.S. mayors, EcoWatch reports.

“All Americans—not only the residents of the states, cities, and counties signing this manifesto—deserve to enjoy fuel-efficient, low-emission cars and light trucks that save money on gas, improve our health, and support American jobs,” their declaration stated. “We strongly urge the auto industry to join us, and to use its influence with the administration to ensure that these standards remain in place.”