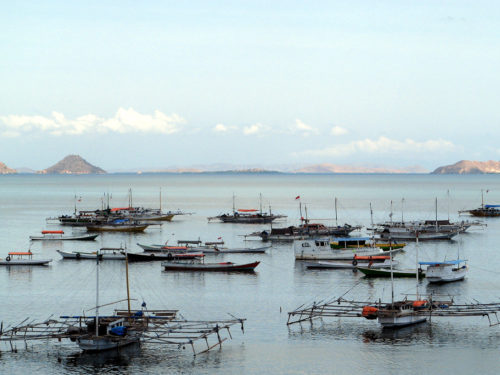 A coastal oil spill that killed at least five fishermen and has local officials comparing an Indonesian bay to a gas station is so far producing a lot of finger-pointing, but not much clarity on how or why the spill occurred.

In the latest installment in an evolving story, Reuters reports that Indonesian officials are blaming a coal ship—or, perhaps, the weather—for the spill off the coast of Borneo. What they have not yet done, notes CNN, is move vigorously to protect a fragile ecosystem and the livelihoods it sustains. Nor are they saying much about the ultimate origin of the spill: an underwater pipeline operated by state-owned energy company Pertamina.

In the days immediately following the spill, CNN reports, Pertamina publicly denied wrongdoing, insisting its tests of the waters off the coast of the busy port city of Balikpapan had determined the spill consisted of marine fuel oil, not the crude carried by its underwater pipelines.

Its subsequent about-face, after further tests showed the seawater was indeed contaminated with crude oil, prompted stern criticism from Greenpeace:

“As a top priority, we demand Pertamina to take full responsibility on the impact of [the] oil spills incident,” the organization stated, calling it “shameful” that the company initially denied responsibility. “We urge Indonesian National Police to continue investigation to determine [the] main causes of leakage.”

According to the latest Reuters update, Indonesian Oil and Gas Director Djoko Siswanto admitted Pertamina “had been late in announcing the source of the oil,” adding that the government was investigating the coal ship now suspected of cracking the state company’s 20-year-old underwater pipe when it dropped anchor in bad weather. Noting that action had taken place “where ships were not supposed to anchor,” he confirmed that “vessel owners would be questioned and could be charged over the deaths resulting from the spill.”

Much good will this do for the lives and livelihoods that depend on crude-free seawater, CNN notes. Notwithstanding the Indonesian authorities’ declaration of a state of “emergency response,” the spill continues to spread, polluting at least 60 kilometres of a coastal ecosystem that includes mangrove wetlands and is home to an endangered marine mammal, the dugong.

In the wake of the deaths of at least five fishermen, a local official cautioned residents not to smoke near the oil spill. “The bay is now like a gas station,” he said.

More like the inside of a gas tank itself, say environmental campaigners like Greenpeace spokesperson Arifsyah Nasution, who told CNN that “the extent of the spill is “quite massive”, with numerous marine mammals and seabirds “likely to be immediately affected, while fish could ingest the oil and cause health problems further down the line.”

“Volunteers consisting of the military and members of the local and business communities have been working for the past two days to clean up oil from coastal areas,” CNN reports. But established environmental groups like Greenpeace that have the expertise and means to guide a more sustained cleanup have “yet to receive any official communication, despite authorities deeming the situation an emergency.”

CNN notes that “the region has experienced severe spills in the past,” reinforcing Nasution’s insistence that the government look to future mitigation strategies. “Long-term recovery measures are crucial (and should) be drawn up soon,” he said.