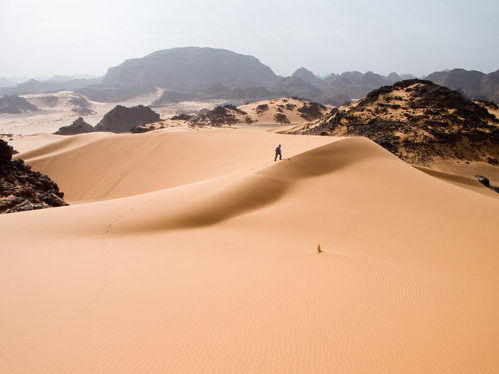 Climate change is an important driver behind a significant expansion of the Sahara Desert over the last century, according to a study funded by the U.S. National Science Foundation (NSF) and recently published in the Journal of Climate.

A research team from the University of Maryland “analyzed annual rainfall data recorded throughout Africa from 1920 to 2013 and found that the Sahara, which occupies much of the northern part of the continent, expanded by 10% during this period,” the NSF reports, marking a first-ever attempt to assess “century-scale changes” to the boundaries of the world’s largest desert.

“When the scientists looked at seasonal trends over the same period, the most notable expansion of the Sahara occurred in summer, resulting in a nearly 16% increase in the desert’s average area over the 93-year span covered by the study,” the NSF states.

Senior author Sumant Nigam, a University of Maryland atmospheric and ocean scientist, said the Sahara’s northward expansion is “likely” a consequence of the so-called Hadley circulation widening because of climate change. (As explained here, the Hadley circulation is the pattern of air currents that creates subtropical deserts in the first place.) Nigam said that effect depends on a steep temperature gradient between the poles and the equator, a gradient that is flattening in the north as the Arctic warms.

However, “the southward creep of the Sahara suggests additional mechanisms are at work,” Nigam told NSF, namely, “natural climate cycles.” One such cycle is “the Atlantic Multidecadal Oscillation, or AMO, in which temperatures over a large swath of the northern Atlantic Ocean fluctuate between warm and cold phases for 50 to 70 years,” the Washington post explains. “The warm cycles deliver precipitation to subtropical areas, and the cold cycles keep it away.”

The Maryland researchers are reluctant to point to climate change as a factor driving the AMO without further study. “Our next step will be to look at what’s driving these trends, for the Sahara and elsewhere,” said lead author Natalie Thoma. But it’s already apparent that the Sahel, the fragile, semi-arid transition zone between the Sahara and the fertile savannas farther south, is drying up.

“The entire Chad Basin falls in the region where the Sahara has crept southward, and the lake is drying out,” Nigam said. “It’s a very visible footprint of reduced rainfall, not just locally, but across the whole region. It’s an indicator of declining water in the Chad Basin.”

Ming Cai, program director in NSF’s Division of Atmospheric and Geospace Sciences, identifies climate change as the force behind that footprint. “The trends in Africa of hot summers getting hotter and rainy seasons drying out are linked with factors that include increasing greenhouse gases and aerosols in the atmosphere,” she said. “These trends have a devastating effect on the lives of African people, who depend on agriculture-based economies.”

The study authors are more cautious. They confirm that one-third of the Sahara’s 20th-century expansion “can be attributed to human-caused climate change,” but note that “longer climate records that extend across several climate cycles are needed to reach definitive conclusions” about the rest.

Even so, the study results “have far-reaching implications,” the NSF notes. “As the world’s population continues to grow, a reduction in land with adequate rainfall to support crops could have devastating consequences.”