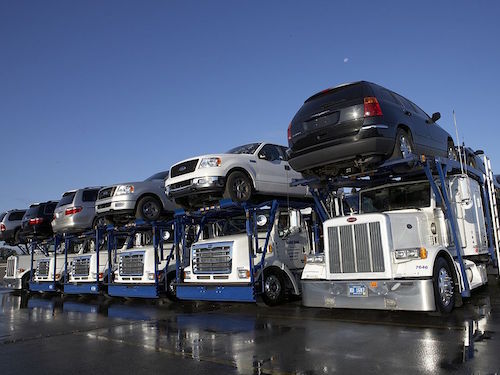 The time has come for Canada to choose between defending its own national climate plan or keeping its fuel economy standards aligned with the United States, Canadian environmental groups say, after U.S. Environmental Protection Agency Administrator Scott Pruitt issued his long-awaited plan to roll back Obama-era tailpipe emission standards for new cars and light trucks.

“Trudeau has been very careful to not criticize Trump, but this one: you’ve got to pick a side here,” said Greenpeace Canada Senior Energy Strategist Keith Stewart.

“Canada was planning on these standards. There is going to be a market in the U.S. that will be following the higher standards. So I think that Canada should be clear that we’re not going to roll back environmental standards because the Trump administration thinks we should be,” agreed Environmental Defence National Program Manager Dale Marshall. “I don’t think our domestic policy, especially our domestic environmental policy, should be set by a regressive U.S. government.”

The government offered no immediate response to Pruitt’s big reveal. But the Toronto Star reports that the battle lines around the rollback are already drawn. “The auto industry wants Prime Minister Justin Trudeau to go along with [Donald Trump’s] move to weaken fuel efficiency standards for cars and light trucks. Environmentalists want Trudeau to refuse, immediately, and join forces with liberal American states.”

Canadian Vehicle Manufacturers’ Association President Mark Nantais said the Detroit Three automakers might decide not to sell some models in Canada if the country sticks to a tougher standard, and claimed higher prices in a fragmented North American auto market would drive up emissions by delaying drivers’ decisions to buy new vehicles.

“The existing standards were initially developed by the former Harper government in Canada, in partnership with the Obama administration, following a push from California and Quebec,” National Observer reports. But “Pruitt—who has said climate change could benefit humans, despite overwhelming scientific evidence it will lead to massive loss of life—announced Monday that the rules restricting carbon pollution from vehicles, a major cause of the planet’s warming, are ‘not appropriate’ and ‘should be revised.’”

“The Obama administration’s determination was wrong,” Pruitt said. “Co-operative federalism doesn’t mean that one state can dictate standards for the rest of the country.” Gov. Jerry Brown called Pruitt’s decision a “cynical and meretricious abuse of power [that] will poison our air and jeopardize the health of all Americans.”

Mary D. Nichols, chair of the powerful California Air Resources Board, added that “this is not a technical assessment, it is a move to demolish the nation’s clean car program. EPA’s action, if implemented, will worsen people’s health with degraded air quality and undermine regulatory certainty for automakers.”

Nearly four dozen major U.S. companies convened by Boston-based Ceres are also pushing back against the rollback, Greentech Media reports. “Major investors and businesses understand that rolling back the Corporate Average Fuel Economy (CAFE) and emissions standards will undermine the global competitiveness of the U.S. auto industry at a time when the rest of the world is moving in the opposite direction, prioritizing clean vehicles and responding to consumer demand for cars that save them money,” said Ceres Transportation Director Carol Lee Rawn.

“Our analysis shows that weakening fuel economy and emissions standards will harm the economy and the auto industry, particularly auto parts suppliers, who employ more than twice as many Americans as auto companies, and who, relying on current standards, have invested heavily in fuel-efficient technologies.”

The Globe and Mail notes that reductions in gasoline consumption over the next 12 years are a “big part” of the effort to meet Canada’s 2030 carbon targets under the Paris agreement. “Improving the fuel efficiency of our vehicles cuts pollution and saves drivers money,” said Caroline Thériault, press secretary to Environment and Climate Minister Catherine McKenna. “We are paying close attention to the U.S. mid-term review of vehicle fuel efficiency standards,” and “any decisions regarding vehicle regulatory changes will be informed by our own midterm evaluation, and by careful considerations of environmental and economic impacts.”

As for Pruitt’s odd attitudes on the reality of climate science, “I don’t have time for politicians who pretend that climate change isn’t real,” McKenna told CTV Question Period Sunday.

While some elements of the auto industry lobbied the Trump administration to relax the next phase of the country’s fuel economy standard, Ford and Honda both affirmed last week that they aren’t looking for a rollback. And the Globe notes that 12 U.S. states plus Washington, DC are matching the more stringent California standard, as they are permitted to do under Section 177 of the U.S. Clean Air Act.

“It’s in Canadians’ best interest that the federal government join California and the dozen other states that intend to keep the fuel efficiency standards as they are, as the auto sector had agreed to before Trump assumed office,” Clean Energy Canada Policy Director Dan Woynillowicz told the Globe.

“Failing to do so means that Canadian drivers won’t benefit from the estimated $900 per year in fuel cost savings, and carbon pollution will be significantly higher than it needs to be,” he added. “The technology exists, the costs to car companies are reasonable, and the benefits are clear.”

In the U.S., the Union of Concerned Scientists says tighter fuel efficiency standards will save U.S drivers US$50 billion by 2030, or $6,000 for the average 2025 vehicle over its lifetime, the Observer notes.

An Environment Canada analysis released in 2014 “said the new rules could add $1,829 to the cost of a new car by 2025, but the consumer would save $900 in fuel costs,” the Globe notes. The estimated cost to manufacturers and consumers has since declined with the advent of new technology.