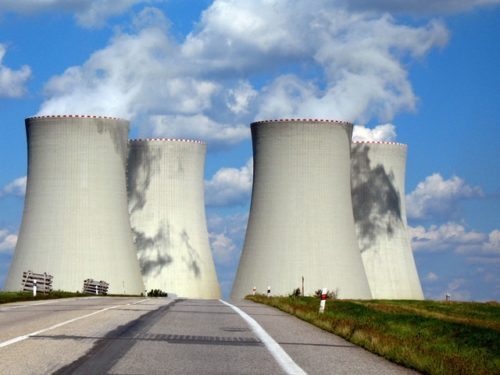 FirstEnergy Solutions and its subsidiaries, including First Energy Nuclear Operating Co., filed for bankruptcy Saturday night, just days after the U.S. utility company appealed to U.S. Energy Secretary Rick Perry to allow it to charge more for standby power from its coal and nuclear generating stations.

Last week, FirstEnergy had announced it would close three nuclear plants in Ohio and Pennsylvania unless it could get emergency relief from the government. “Though the plants have taken aggressive measures to cut costs, the market challenges facing these units are beyond their control,” said Don Moul, president and chief nuclear officer at FirstEnergy Solutions Generation Companies.

Which was essentially the sound of a company that was “deep in debt and undercut in the marketplace by renewable power,” InsideClimate News notes. “There is just too much cheap natural gas in Pennsylvania and Ohio,” added equity analyst Charles Fishman at Morningstar Research Services.

The company’s 44-page missive asked Perry “to promptly compensate at-risk merchant nuclear and coal-fired power plants for the full benefits they provide to energy markets and the public at large, including fuel security and diversity.”

In the letter, “FirstEnergy said that if it has to shutter outmoded or uncompetitive plants, the nation’s largest regional grid operator—PJM Interconnection—might lose the capacity to reliably serve its customers from the Atlantic Coast into the Midwest,” InsideClimate reports. “The highly unusual request would benefit not only FirstEnergy’s own subsidiaries in the 13-state region, but any other company in a similar position.”

While Perry “has repeatedly expressed sympathy for the plight of companies with stranded coal and nuclear assets,” InsideClimate notes, the response from PJM was “swift and full of condemnation,” Politico Morning Energy reports. “We repeatedly disagree with them on the fundamental assertion that there is an emergency,” said Senior Vice President and General Counsel Vincent Duane.

The U.S. Sierra Club vowed to fight FirstEnergy’s bailout attempt in court, and the American Petroleum Institute scorched the utility’s attempt at a subsidy.

“FirstEnergy is trying every trick in the book to get Rick Perry and the Trump administration to stop the rapid growth of the clean energy economy, boost their own profits, and drag us backward into the past yet again, but they will not succeed,” said Mary Anne Hitt, director of Sierra Club’s “Beyond Coal” campaign.

“FirstEnergy’s latest attempt to spread a false narrative surrounding the reliability of the electric grid is nothing more than a ruse that will force Main Street consumers to pay higher prices,” said API Market Development Group Director Todd Snitchler. “For FirstEnergy to cry wolf on the issue of grid reliability is irresponsible, and is the company’s latest attempt to force consumers to pay for a bailout. PJM is responsible for the reliability of the grid, and if there is an emergency, PJM already has the tools to respond.”

Before FirstEnergy Solutions’ trip to bankruptcy court, the prospects for a Department of Energy bailout looked grim, Politico noted. “We would never use a 202 [emergency order] to stave [off] an economic issue. It’s not designed for that,” Bruce Walker, assistant secretary for DOE’s Office of Electricity Delivery and Energy Reliability, told media in February. Montana regulator Travis Kavulla, former president of the U.S. National Association of Regulatory Utility Commissioners, added that the process FirstEnergy was trying to initiate would normally take six months.

“The type of relief they’re asking for is not very easy to administer,” he said. “You can’t wave your hand and say, ‘Let it be so.'”

Malcolm Woolf, senior vice president of policy at Advanced Energy Economy, urged Perry “to reject FirstEnergy’s blatant appeal for a multi-billion-dollar bailout of uneconomic and unnecessary power plants.” He added that “this outrageous attempt to evade established market procedures is unprecedented. FirstEnergy is asking the Secretary of Energy to exercise authority that is reserved for an emergency threatening national security, just to salvage power plants that are losing money for their owners and costing money for consumers.”

Sandy Buchanan, executive director of the Cleveland-based Institute for Energy Economics and Financial Analysis, was predicting the bankruptcy by week’s end, adding that “the utility has no one to blame for its ruin but itself. Its long record of flawed nuclear projects is deplorable, but perhaps chief among its many missteps in recent years was its doubling down on coal by purchasing Pennsylvania-based utility Allegheny Energy in 2011—a deal it went forward with at a time when energy markets were clearly shifting away from expensive coal-fired power and toward gas and renewables.”