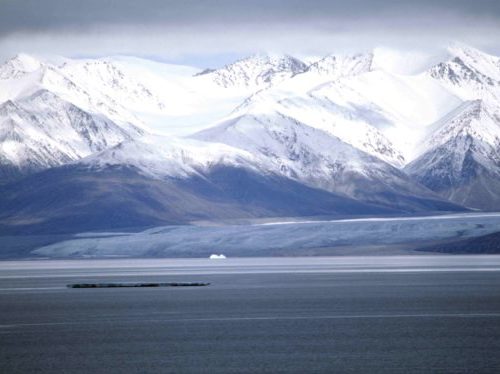 The atmosphere has already warmed enough to melt more than one-third of the world’s glaciers outside Antarctica and Greenland, in spite of current efforts to reduce greenhouse gas emissions, according to a new study in the journal Nature Climate Change.

Even with no further warming, 36% of glacier ice will eventually be lost, enough to add 11 centimetres to global sea levels, Carbon Brief reports. Many of the world’s glaciers have already begun to retreat, and from the Canadian Rockies to the Mount Everest Region in the Himalayas, “we really are on course to obliterate many of these mountain landscapes,” one scientist stated.

The study looked at the lag between rising atmospheric temperatures and the pace at which glaciers adjust. In an email to Carbon Brief, researcher team members Prof. Ben Marzeion, Dr. Georg Kaser, and Dr. Fabien Maussion, compared the effect to moving an ice cube from the fridge to the kitchen table.

“The time it takes to fully melt the cube depends on: a) the size of the cube; and b) the temperature in your kitchen,” they wrote in an email. But even if the warming stops, “if the glaciers are out of equilibrium, they will respond by either expanding or retreating and, eventually, stabilizing at a different size. The difference between this glacier state and the actual present glacier state is the committed glacier change.”

Most of that process will play out in the 200 years after atmospheric temperatures stabilize, and “the adjustment will be more or less complete” after 500 years, they explained. But eventually, every kilogram of carbon dioxide emitted today will be responsible for about 16 kilograms of glacier melt, and immediate reductions in emissions “will only have very limited influence on glacier mass change in the 21st century.”

In addition to contributing to sea level rise, the gradual loss of glaciers affects downstream communities that depend on them for freshwater. “Generally, you can expect that regions with large glacier surfaces and very dry warm seasons will see the strongest impacts on river runoff,” the authors stated. “Transiently, as glaciers melt, the runoff may first increase and later will decrease as glaciers become small.”

University of Washington Prof. Gerard Roe warned that we “really are on course to obliterate many of these mountain landscapes,” describing glaciers as “icons of climate change. We’ve used their observed retreat as a way of reaching back into past centuries to understand the changes we’ve caused. Studies like this tell us that the continued retreat of glaciers allows us to reach 100 or 200 years into the future, and gain an appreciation of the changes we are already committed to.”