‘Passive-Aggressive Haus’ Was Worth the Effort, New Homeowner Attests 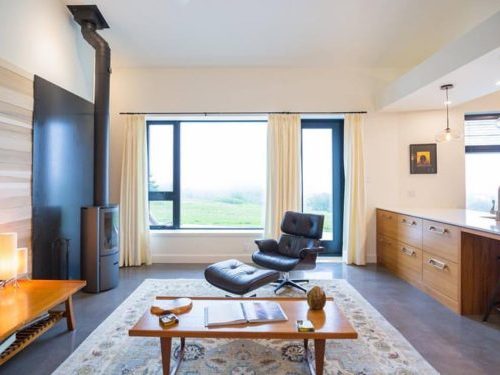 Ottawa climate activist and creative writer Ann Cavlovic is out with an epic account of her and her partner’s determined effort to build a new home to the Passivhaus standard. While the experience drove her to nickname the structure the “Passive-Aggressive Haus”, she still concludes that there are “no good reasons” for anyone not to do the same with a new home.

“I hope, very soon, there will be no reasons whatsoever,” she writes, in a recent post for Canadian Architect.

But Cavlovic, whose satiric stage play Emissions: A Climate Comedy won rave reviews at the 2013 Ottawa Fringe Festival, still has a handful of key recommendations for anyone who wants to follow in her footsteps.

First, hire a certified Passive House designer, alongside your architect and builder. The specialized expertise is critical, Cavlovic says, recalling a project in Belgium where “the insulation and ventilation systems were improperly installed, leading to levels of mould and formaldehyde (from the wall sheathing) that rendered it uninhabitable.”

Second, recognize that architects and builders willing to do Passive House construction are currently thin on the ground, at least in Canada. Passive House certification is necessarily “onerous” and exacting, she points out, and many professionals recoil at the thought.

Third, recognize that architects and builders are generally from different planets—and will quarrel with each other, with you, and with others involved in the Passive House process. On the other hand, some cross-talk and oversight among professions and skilled trades can be a good thing.

“Our carpenters took pride in their work, which is far too rare these days yet crucial for any high-performance building,” she recalls. “They practically stalked the electrician, plumber, and other sub-trades to ensure no unplanned holes were poked through the air barrier.”

Fourth, be resilient. “Building any house is an exercise in problem-solving, decision fatigue, regret, and sorrow,” Cavlovic observes. “The most resilient embrace each blow to the head, and the wallet, as an ‘opportunity’ to overcome a challenge.”

While Cavlovic and her husband tended “more toward ugly tears,” she writes, “only a small portion of those ‘opportunities’ were linked to the Passive House elements of the house.”

The final takeaway, she says, is that Passive House construction works. “Our son, who ‘helped’ in little ways, yelped for joy on moving day.” And now, the deepest significance of her extremely snug, sunlit house—and what kept her going through the nightmare bits—is that building better is “one very significant way to help our climate.”