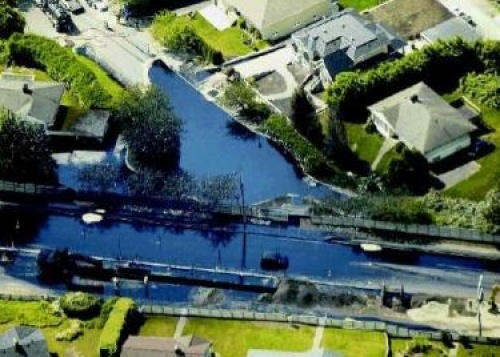 Two Members of Parliament were arrested at the Kinder Morgan construction site on Burnaby Mountain and protesters descended on 44 MPs’ riding offices, including Cabinet ministers Jim Carr, Catherine McKenna, Carolyn Bennett, and Jody Wilson-Raybould, as opposition to the Trans Mountain pipeline expansion accelerated across the country, generated coverage as far away as India, and produced a sympathetic profile in the pages of Teen Vogue.

As of early Saturday evening, 172 protesters had been detained at Burnaby Mountain, with MPs Elizabeth May (G-Saanich-Gulf Islands) and Kennedy Stewart (N-Burnaby South) arrested Friday.

“They teach us the ways to take care of the land and carry on the traditions of our people,” Tsleil-Waututh youth Ocean Hyland said of the Elders who spoke up for the value of the land and water. “We’re at the stage now where we’re thinking about those future generations and how we’re going to carry on those teachings and carry through those ceremonies to protect the land we’re here on today.”

“We want to amplify the voices of many First Nations and communities along the route who are standing up to defend their land and water,” said Climate Justice Edmonton organizer Hannah Gelderman. “This pipeline is a huge risk to investors; with all the opposition, the pipeline’s not going to go through.”

“As Albertans, we’re also here to say when we voted for Rachel Notley, we voted for change,” added one of a small group of protesters who entered the Kinder Morgan building to chant, sing, read statements from Indigenous leaders, and block two sets of doors at opposite ends of a hallway. “They were looking for a transition and something that isn’t tying us into this boom-bust economy, and what we’ve seen is the same old business as usual with Rachel Notley.”

Gelderman said it was important to show that there are Albertans who oppose the controversial pipeline project. “We can diversify our economy and there’s a lot of potential in renewables,” she said. But “we can’t keep investing in a dying industry and an industry that has so much risk from climate and communities. That’s not a sound economic investment.”

The protests received extended coverage in The Link, the student newspaper at Concordia University in Montreal, and on NewsClick, a site in India that recapped the protests so far and focused in on the “surreal” scene that resulted when a construction crew punctured the existing Trans Mountain pipeline in 2007. A resident who was on the scene recalled crude oil “shooting up…at least 30 feet high, spraying onto the roads and property, the landscaping, and the trees,” NewsClick notes, citing a report in local newspaper Burnaby Now. “The whole road was covered in black oil,” and 225 local residents were advised to evacuate.

“The crude oil seeped into the surrounding soil, storm drains, and sewer lines,” the Transportation Safety Board later reported. “The Barnet Highway was closed for several days. Moving through the storm drain system, the crude oil eventually reached the marine waters of Burrard Inlet, where it began to spread further into the inlet through wind and tide action. Burrard Inlet’s marine environment and approximately 1,200 metres of shoreline were affected by the crude oil spill. A number of shore birds were contaminated after coming into contact with the oil.”

NewsClick also paints a picture of a company with a poor safety and compliance record, with 121 reported incidents in the United States in the 146 months between 2006 and February 2018. Those pipeline breaches spilled 17,598 barrels of hazardous liquids and caused more than US$63 million in property damage, according to the U.S. Pipeline and Hazardous Materials Safety Administration.

“Kinder Morgan’s high-level business strategy is to starve its pipelines and related infrastructure of routine maintenance spending in order to maximize distributable cash flow,” financial research firm Hedgeye reported in 2013. In 2012, “Kinder Morgan acquired El Paso, then the largest natural gas pipeline company in the US, in a +$30B deal; Kinder Morgan has already cut maintenance expenses by 70-99% and maintenance [capital expenditures] by 60% on most of those assets. In our view, it is alarming that Kinder Morgan supporters believe that this is a sound business practice.”

Kinder has also been fined for a litany of questionable practices, including “stealing coal from customers’ stockpiles, lying to air pollution regulators, illegally mixing hazardous waste into gasoline, and many other crimes,” according to a separate report cited by NewsClick.